HIV Drug market is one of the growing drug markets across the globe. There has been a significant rise in number of HIV population worldwide. On the other hand, increase in number of cases of infection transmission through contaminated needles or infected blood has been registered in last few years. Breast milk, unprotected sex is the most common & big route of HIV to infect a large number of population across the globe and decrease the immunity of protection against infections. 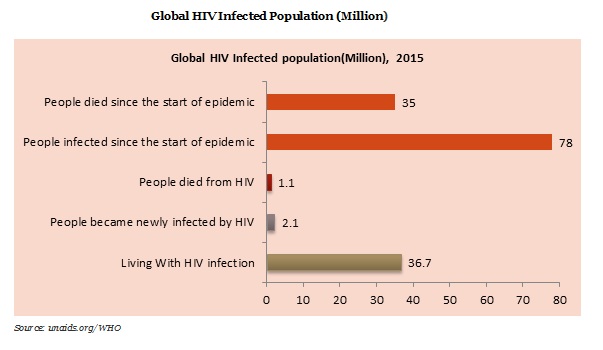 Several government initiatives have been started and awareness programs are entertained in order to minimize the burden of HIV across the globe. Improvements in medicinal therapies like antiretroviral therapy (ART) which are also affordable for the patients suffering from HIV helps in the overall care and also increasing life expectancy of the patients. In 2014, 25 antivirals, 16 vaccines and 3 gene therapies have been introduced in the U.S. to improve treatment facilities with better and effective cure. Several drugs have been recently licensed for the treatment of HIV-1 infected patients. These new drugs include CCR5 co-receptor antagonist which is using for the patients those have developed resistance from previous drugs and therapies.

New developments and introduction of effective and affordable therapies is expected to expand the demand for HIV drugs over the forecast period i.e. 2015-2023. 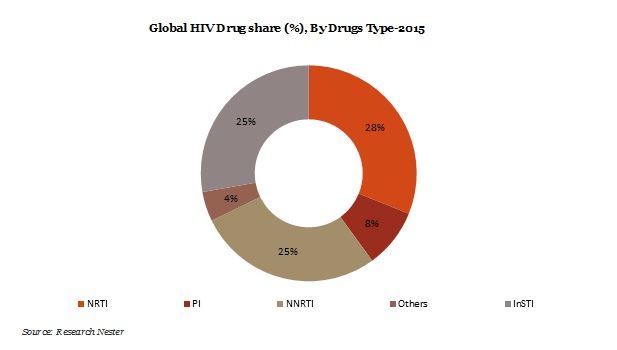 Global HIV Drug Market is further segmented on the basis of drugs type as follows:

HIV Drug Market is further classified on the basis of region as follows:

Lack of awareness in under developed nations towards protected sex is likely to further raise the population suffering from HIV which is further believed to increase the growth of HIV drug market across the globe during the forecast period 2015-2023. Advancement in healthcare and drug technology due to huge funding in Research and Development sector would help the companies to develop more effective drugs to restrict the dysfunctions and loss of immunity in the human body and is expected to grow the demand of HIV drug and further enforce the market of HIV drug globally.Further, governmental initiatives and rising awareness towards HIV and its carrier is anticipated to propel the demand for HIV drug market over the forecast period 2015-2023 globally. Apart from this, huge funding from the governmental authorities to provide better facilities and cure at affordable cost will make buyers to adopt the precautions related to HIV which is expected to propel further expand the demand of HIV drug market globally. Availability of Anti-retroviral Therapy (ART) with efficient fixed-dose combination reduces the burden of taking excess of pills to keep the infection inactive on the human body which helps the patients to opt these therapies with minimized number of dose. These therapies are expected to grow the demand of HIV Drug over the forecast period i.e. 2015-2023.

However, lack of availability of better and effective cure for HIV in low income countries would be a challenge for the HIV drug market during the forecast period. It has been notified that major population of HIV infected people is present in Sub-Saharan Africa region where the healthcare facilities are expensive for most of the population due to low disposable income which is expected to hinder the growth of HIV drug market.

Generic drugs present in the market are not affordable for the population of low income nations as manufacturing of drugs through original patents is expected to raise the cost of HIV drugs which would be a huge restraint for the HIV drug market. Addioitnally, experiencing treatment failure in several therapies of fixed dose due to development of resistance or toxicity in the body is a major burden and restraint for the HIV Drug market across the globe.

The key developers of HIV Drugs across the globe as follows:

The Global HIV Drug market is segmented as follows:

September 15, 2016: High court of England ruled to health department of the respective nation to provide appropriate measures to cure HIV infected people and arrange services to prevent the spread of HIV by providing anti-retroviral drug to the affected patients.

September 20, 2016: Scientists of U.S. and Canada developed a new innovative way to find the hidden infected cells. This new research opens up new doors to provide better treatment for HIV infected people across the globe.