A high-pressure oil and gas separator are a spherical or cylindrical pressure vessel used to separate oil, water, and gas from the fluid stream produced by an oil well. In order to produce the hydrocarbons, the most fundamental part is separation. The operating principle of separators is that the lightest fluid rises to the top while the heaviest fluid settles to the bottom. It is installed either on an offshore platform or on an onshore processing station. High pressure separators can handle pressures ranging from 975 and 1500 psi.

Based on product type, they can be categorized into two-phase and three-phase, wherein the two phase type typically deals with oil and gas and the three phase type deals with water, oil and gas. On the basis of specific application, a high-pressure separator is also known as a degasser or deliquilizer. Degassers is used to remove gas bubbles from liquid stream, while deliquilizers are used to remove dispersed liquid droplets from gas stream. Based on vessel type, horizontal high-pressure oil and gas separators are suitable for high gas-oil ratios and constant flow well-streams, while vertical separators are designed mainly for intermediate gas-oil ratios. The degree of separation between liquid and gas depends on certain factors, such as operating pressure of the separator, type of flow of the fluid i.e. turbulent flow or laminar flow, and fluid mixture residence time.

The market is segmented by product type (two-phase separator, three-phase separator, degassers and deliquilizers); by vessel type (horizontal, spherical, vertical); by application (on-shore, off-shore, refineries). Based on application, the primary use of the product is concentrated in the upstream industry. Based on vessel type, horizontal vessel segment has the largest share since these vessels can handle large volumes under high pressures, and countries such as Venezuela, Saudi Arabia, and Canada have high demand for them. 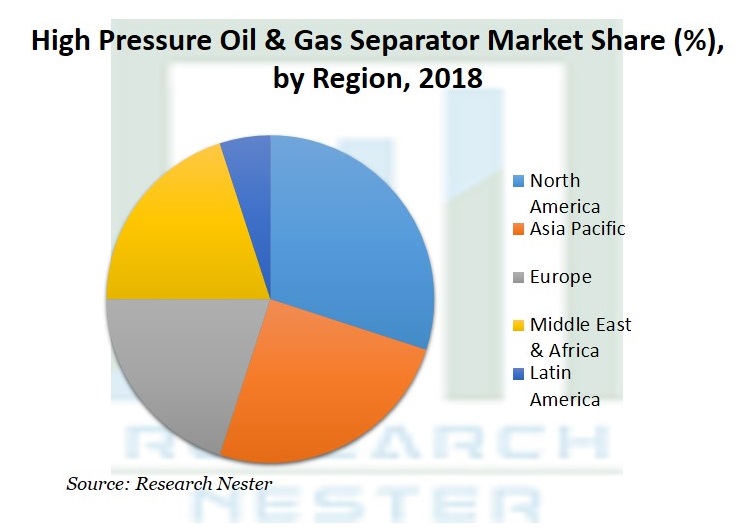 Growth in unconventional resources, mainly shale gas and oil reserves along with large investments in exploration and production activities is set to drive the market for high pressure oil and gas separators. Moreover, prevailing and upcoming installation of off-site and on-site processing facilities is also expected to boost the demand for the product.

Oil and gas separator manufacturers are conducting R&D activities to reduce the equipment cost and increase efficiency. The overall efficiency of high-pressure separators is largely dependent on the nature of the inlet devices. There are a range of inlet devices available with diverse working mechanisms.

Dipping global crude oil prices and unpredictability of the oil and gas industry has led to a reduction in exploration, drilling and production activities. For instance, Baker Hughes reduced rotary rigs by 21 to 934 in September 2016 from May 2016. This is 206 rigs lower than September 2015. The drastic reduction in the number of operational rigs can be attributed to weakened oil prices and increased rig efficiencies. Huge cuts in the capital budget of E&P companies coupled with emergence of non-conventional and renewable sources of energy are other factors to hamper industry growth.

North America accounts for the significant market share among other regions owing to the rise in discovery of multiple reservoirs of shale oil and gas and rising offshore exploration activities in the region. Additionally, the region is witnessing an increased production from existing reserves on account of recent fall in oil prices.

Asia Pacific is also expected to register significant growth owing to constantly increasing the population and high rates of urbanization. Countries such as China, Malaysia, Indonesia, India and Vietnam are yet to realize its complete potential.

The high-pressure oil and gas separator market is further classified on the basis of region as follows: