Green cooling technologies refers to eco-friendly refrigeration and air-conditioning (RAC) equipment which have minimum negative impacts on the environment. The primary objective of these technologies is to reduce the emission of greenhouse gases (GHGs) from cooling sector and thereby promoting natural refrigerants, maximizing energy efficiency along with commencement of a sustainable approach towards energy consumption. The refrigerants used in RAC are halogenated paraffin hydrocarbons known as chlorofluorocarbons (CFCs) or hydrochlorofluorocarbons (HCFCs). These refrigerants pose a threat to the environment owing to their ozone depletion potential (ODP) and global warming potential (GWP).

The market is observing significant growth on account of steady increase in the worldwide demand for refrigeration and air-conditioning (RAC) equipment. This increase in demand for RAC can be further attributed to growing population, urbanization and robust economic growth. In the current scenario, more and more people can afford domestic refrigeration and air-conditioning which is also anticipated to propel the gradual shift towards the adoption of green cooling technologies. In addition, increased demand for electricity due to refrigeration and cooling is also estimated to contribute for the growth of the market over the forecast period.

Furthermore, phasing out of the manufacturers of CFCs and HCFCs under the Montreal Protocol is also projected to positively impact the growth of the market. 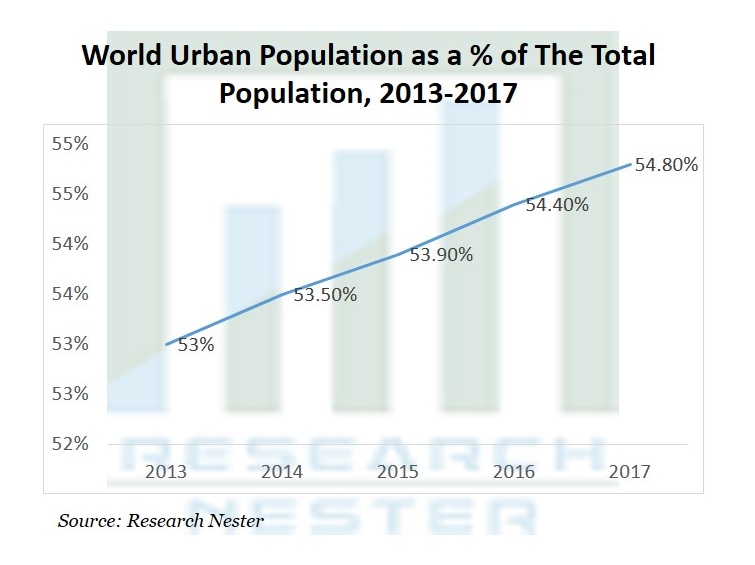 The green cooling technologies market is anticipated to witness a notable growth on account of rise in emissions of greenhouse gases such as, CFCs and HCFCs. The prime source of emission of these gases are refrigeration and air-conditioning equipment. As per Intergovernmental Panel on Climate Change (IPCC), global CO2 emissions from energy and industry observed a significant increase in 2017. Moreover, total annual GHGs emissions, including the emissions from land-use, accelerated from 0.7 GtCO2e in 2016 to 53.5 GtCO2e in 2017. Such an alarming increase in the emission of these harmful greenhouse gases in the forthcoming years is expected to foster the market growth.

Various government policies and regulations regarding the adoption of sustainable and innovative cooling technologies that use natural refrigerants in emerging and developing countries are estimated to boost the growth of the market during the forecast period. Such improved technologies are anticipated to reduce GHGs emissions and enhance the energy efficiency. An instance of such regulatory measure is Green Cooling Initiative (GCI). GCI is an international alliance of key players in RAC sector which comprises various government institutions, international organizations and private sector. The aim of this association is to promote sustainable cooling technologies in order to protect the global climate from the harmful emissions.

Furthermore, international treaties such as, Montreal Protocol and Kyoto Protocol were also adopted and implemented to prevent the depletion and protect the environment. Hence, they have also contributed toward growth of the market. The former protocol was designed to protect the ozone layer by phasing out of ozone depleting substances (ODS) while the latter commits the state parties to reduce the GHGs emission.

One of the major restraining factors concerning the advancement of green cooling technologies is the high upfront cost associated with the installation of these equipment. Additionally, the technology used is relatively new and requires specialized equipment along with niche installation knowledge about the equipment. Therefore, due to lack of availability of trained personnel and spare parts required for installation of these equipment the growth of the market is expected to decline during the forecast period.

The market in North America and Europe is expected to witness a noteworthy growth owing to the implementation of stringent regulatory measures in these regions. Asia Pacific market is also anticipated to observe a considerable growth over the forecast period. This can be attributed to increase in production and sales in the RAC sector. For instance, the overall demand for AC in China increased from 40,587,000 in 2016 to 45,945,000 in 2017, as per JRAIA.

The green cooling technologies market is further classified on the basis of region as follows: