Gout is a type of inflammatory arthritis which develops in some individuals who have high levels of uric acid in their blood. The accumulation of acid causes needle like crystal formation in the joints and can cause sudden pain, redness, tenderness, warmth and swelling. There are several types of gout which includes asymptomatic hyperuricemia, acute gout, interval gout and chronic gout. The symptoms of gout includes lingering discomfort, inflammation and redness, limited range of motion, intense joint pain.

The accumulation of urate crystals in the joints results in severe inflammation and pain. High uric acid in the blood stream is the main cause of gout. Foods such as meats and seafood promotes higher levels of uric acid. Uric acid in the bloodstream passes through the pair of kidneys which gets eliminated. There are times during which the body produces too much uric acid, whereas, the kidney excretes too little uric acid. This causes the accumulation of uric acid in the blood which results in gout. Gout can also cause severe health complications which includes kidney stones and recurrent gout that can further cause gradual damage to the neighboring tissues and joints. If the crystals get accumulated in the urinary tract, it can cause kidney stones. Proper management of gout includes therapy duration, comorbidities, adjunctive measures, gout flare prophylaxis and many more.

The gout therapeutics market is anticipated to record a CAGR of 15.7% over the forecast period. The market is segmented by drug class into corticosteroids, colchicine, urate-lowering agents & NSAIDs, out of which, the non-steroidal anti-inflammatory drugs (NSAIDs) are anticipated to dominate the market on account of low cost, easy availability and superior level of penetration of drug. Additionally, colchicines are also expected to have a significant market share in the overall market on account of higher effectiveness to reduce severe inflammatory response. CLICK TO DOWNLOAD FREE SAMPLE REPORT 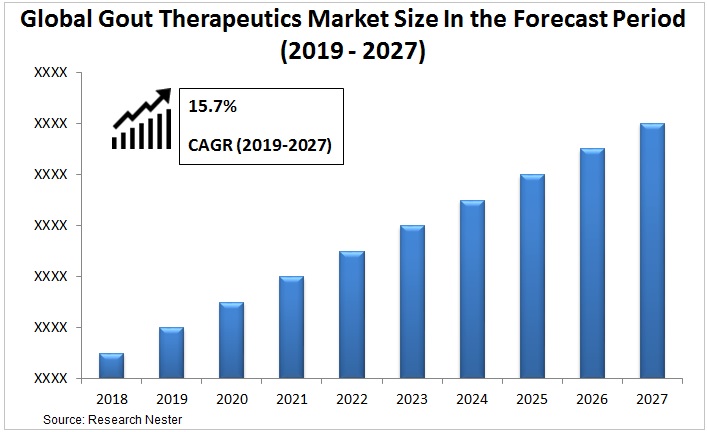 High consumption of alcohol have the ability to increase the chance of developing gout and it also has the potential to worsen the pre-existing gout. Alcohol consumption, especially beer, is directly related to gout as the increase in alcohol consumption is expected to cause gout because of the high purine content of alcohol. The brewer’s yeast, which is present in beer is also believed to worsen gout. For these reasons, the high alcohol consumption amongst people around the globe is anticipated to boost the growth of the global gout therapeutics market. Apart from that, rising rate of smoking among the population is also estimated to augment the growth of the market over the forecast period.

The less awareness about gout therapeutics and its advantages over the conventional methods among the middle and low income countries around the globe is anticipated to hamper the growth of the market over the forecast period.

North America is anticipated to have the maximum share in the overall market on account of increasing adoption of gout therapy, rising investment in the healthcare sector, presence of different prominent players and increasing prevalence of gout across the region.

The Asia Pacific market is also expected to witness a significant growth which can be attributed to larger patient pool, advancement in the healthcare sector and higher investment by the countries including Japan, India and Malaysia which is further expected to drive the growth of the market.

The global gout therapeutics market is further classified on the basis of region as follows: