Volumetric display is a device which is used for visual representation of objects in three dimensions. The formation of 3D image is formed via emission, scattering or relaying of illumination from well-defined regions (x,y,z) in a space. It offers 360 degree field view of an object. The display includes 3D pixels which absorb or emit light from isotropically emissive light device (IEVD). Since, the image is formed either in absence or presence of light, it creates X-ray like effect on input data. This method is used for the purpose of different data visualization such as mathematical surface modelling, biological & chemical structures and technical design. There are basically two types of volumetric display, swept volume display and static volume display. Swept volume display helps in recreation of image from projected 2D slices whereas static volume display have no major moving parts to display, it works on changing color to display a solid 3D image.

Volumetric 3D displays have many useful properties, including a wide field of view. In addition, these displays avoid accommodation and vergence mismatches, support multiple simultaneous observers, provide high-resolution imagery and excel at several generic visualization tasks. There are many advantages of volumetric display such as motion parallax, vergence and accommodation.. It has many advantages compare to ordinary 3D display such as observers does not require any special type of glasses as 3D images from multiple angles and depths can be easily seen in volumetric display. Ordinary 3D image representation devices use multiplex images on horizontal axis, whereas volumetric display devices use horizontal as well as vertical axis for image magnification which results in optimum display of image.

The global volumetric display market is anticipated to record a CAGR of 32% over the forecast period i.e. 2019-2027. The market is segmented on the basis of end-user into education, healthcare, aerospace, advertisement and others, out of which, healthcare segment accounts for leading market share on the back of advancement in medical imaging system such as X-ray, MRI, city scan and others. Additionally, the application of volumetric display is widely used in production of consumer electronics such as mobiles, laptops and television for high resolution images. Also, increasing demand of 3D technology in end user industries is projected to fuel the market growth over the forecast period. CLICK TO DOWNLOAD FREE SAMPLE 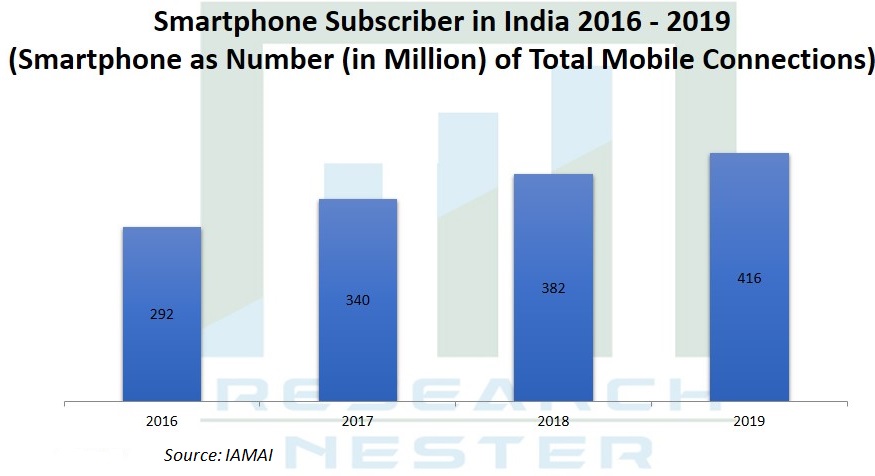 Various medical examinations such as X-ray, CRT and city scan uses digital technology to optimize the image results. Volumetric display is widely used in medical imaging application for the visualization of different interior part of the body through 3D techniques. It gives a unique real time experience of medical images by computed tomography and magnetic image resonance. Additionally, it is also used in study of external beam cancer treatment for various research projects since it offers 3D image of cancer cells and their movement. Major players in the industry are investing their money to obtain greater accuracy in high resolution images. These factors are projected to drive the market growth over the forecast period.

According to Internet and Mobile Association of India (IAMAI) report, there are 382 million subscriber of smartphone in India in 2017, compared to 2016 there was 340 million subscribers.  The application of volumetric display is projected to increase in the field of telecommunications since it has the ability to utilize 3-D display as an I/O device for distributed applications. This has the potential to speed the product design process and reduce its cost. Furthermore, as the color gamut and resolution of the display increases, it may be used as a component of a virtual reality telecommunications system, in which conference participants may connect in real time. Another aspect relating to this field is the ability to send the 3-D data over existing networks. These factors are projected to propel the market growth over the forecast period.

The market in Asia Pacific region is estimated to witness highest growth during the forecast period on account of increasing uses of volumetric display in production of consumer electronics such as mobile, television and computers. Additionally, large number of geriatric population suffering from cardiovascular diseases which requires imaging technique for diagnosis are projected to boost the market growth in this region.