A processor can be best explained as an electronic circuit that carries out the entire operations for a device, be it for a computer or a smartphone by responding to and processing the instructions that control the computer or smartphone as the case may be. The processor is normally considered as the CPU of the computer that processes instructions and in the case of a smartphone, is responsible for performing all kinds of fundamental calculations and for executing codes. The entire operations are being executed by the processor as per the instructions of the smartphone user. The processor provides the user with the necessary output by taking in the input and converting them into electronic signals.

The growth of the smartphone processors market is driven by various factors that are specific to every region as well as country. The technological upgradations have been continuously taking place in smartphones which includes continuous improvements in technology at every stage, while processors are manufactured, assembled and finally tested. The use of ARM processors primarily covering consumer electronic devices such as smartphones or tablets and in some cases even wearables, owing to their comparatively reduced set of instructions present, means that only a few transistors would be sufficient to serve their purpose. Moreover they consume lesser power and are comparatively simpler and smaller in size that suits their application in small devices such as smartphones.

The smartphone processor market is anticipated to grow at a significant CAGR over the forecast period i.e. 2020-2027. The market is segmented by technology & by application, out of which, the technology segment is anticipated to occupy the leading market share on account of increasing number of technologically advanced processors entering the market that are being released by a selective number of market players who are focusing on new innovations.

There has been a slow rise in the personal incomes of skilled working population across the globe and they are preferring to own smartphones and other smart devices that are based on their applications for several uses. There is a growing attraction towards usage of high end smart phones with faster processing capabilities among the global skilled workforce. With major companies establishing offices all over the globe, followed by heavy investments in the field of research and development, smartphone processors with focus on user-friendly application for users is estimated to generate significant demand among the major global population over the forecast period.

Growth In The Number Of Internet Users Over The Past Decade 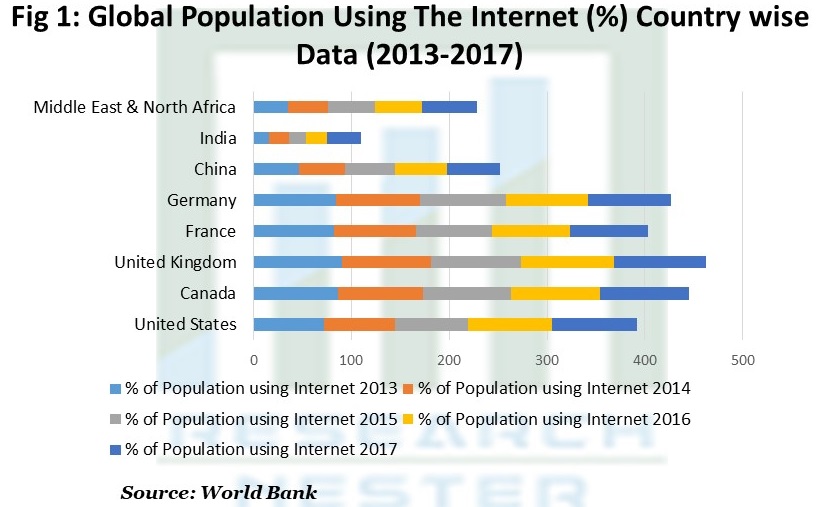 Although faster power consumption and reduced battery lives may be a cause of concern for the majority of the smartphone users, due to the function of processors deciding the working of smartphones, there are many other additional factors that could affect the working of smartphones. Smartphone processors are basically running on System on a Chip (SoC) architecture, wherein, SoC being a single chip comprises of sensors, radios, several layers of security and so on, which are all included and packed into the single chip which consumes higher power for the user. Sometimes, issues such as overheating on mobiles or hanging issues on mobile screens that could cause concerns and anxiety for these smartphone users who may be dependent on it for their daily activities. The speed at which technology is driving out outdated models may lead to more smartphones becoming outdated and unproductive. All these factors may play a major role in shaping consumer buying behavior and may act as a restraint to the growth of the market over the forecast period.

On the basis of regional analysis, the smartphone processor market is segmented into five major regions including North America, Europe, Asia Pacific, Latin America and Middle East & Africa region. The market in North America is anticipated to register the highest market share, owing to the presence of leading manufacturers of smartphones, higher disposable incomes of the working population who are preferring these smartphones for their applications and utilities, rather than just based on the design or the brand of these smartphones. The market in Europe is estimated to perform well, owing to the increased number of individuals having huge disposable incomes and their attraction towards luxury smartphones that are equipped with latest technologies. While the market in Asia Pacific is anticipated to cover a significant number of population that is skilled and tech savvy and are interested in investing in luxury smartphones with multi-core processors.

The smartphone processor market is further classified on the basis of region as follows: