In today’s era of modernization, where sectors such as agriculture, horticulture, plasticulture, and others have observed robust growth, there also has been variations to the adaptation of technology in these industries. Plastics has been one such product, whose implementation into the agriculture industry has grown multifold. It has dramatic adaptability characteristics, which lets itself form into enormous variety of complex shapes, and thus facilitate design solutions in thousands of applications, one such being the mulch films.

Mulch films are used as a farming tool in the high-tech farming processes, for germination of seeds, plants, fruits, etc., so as to maintain and provide correct temperature, humidity, sunrays and also protect them from harmful micro-organisms to limit their detrimental growth.

The usage of these films has both advantages and disadvantages, the major issue being unable to or consume long durations to degrade into the soil, owing to soil pollution. This has led to the development of different types of self-degradable polymers, one such being light degradable mulch film, also known as photo degradable mulch film.

Light degradable mulch film have self-degradable properties, and are of biological origin. They are generally produced from various sustainable sources, and degrades into the soil using photo-initiated chemical reactions, the end decomposed products being carbon dioxide (CO2) and water (H2O).

The light degradable mulch film market is observing vibrant growth on account of growing focus to adapt high productivity yield using smart farming solutions, in a rapid competitive landscape, optimizing costs and humanly labor. Furthermore, rising environmental concerns, owing to various sources of pollution, have led to the focus on using biological tools to curb such issues. These significant factors are expected to boost the growth of the light degradable mulch film market.

The market is anticipated to record robust growth throughout the period of forecast, i.e. 2019-2027. The light degradable mulch film market is segmented by application into agricultural farms and horticulture, out of which, the agricultural farms segment is anticipated to have largest market share on account of growing demand for high yield crops with low productivity cost and lesser farming period. 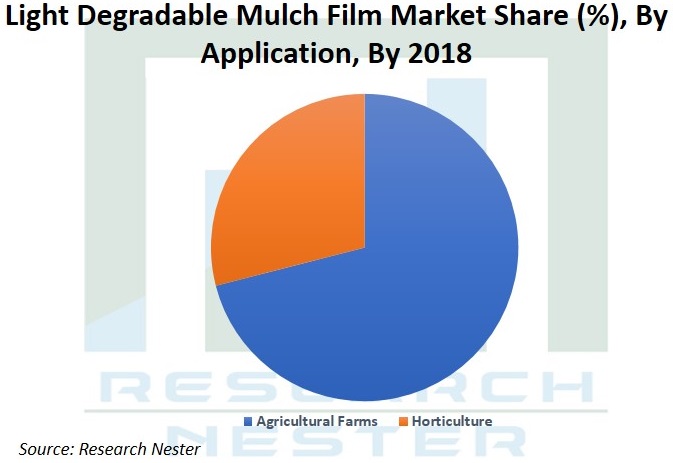 Farmers, in the recent era, have adopted various biotechnological processes, on the back of organic fertilizers and pest control solutions, mechanized tools and machineries, bio-chambers and others. To increase the productivity and gain high yield of crops, compared to that of generic processes. This has resulted into developing smart farming solutions to curb pollution of the environment and provide more quantity and quality yield. The rise in technical advancements of the industry, caters to the rising need of such light degradable mulch film, which degrades into the soil within certain period of time as micro particles.

According to Statistics Denmark, generation of plastics waste from agriculture and horticulture industry grew from zero ton in 2011 to 187 ton in 2015. Such rising concerns cater to the need of light degradable mulch film which self-degrades into the soil, reducing plastic wastes. These factors are anticipated to support the growth of the light degradable mulch film market throughout the forecast period.

A major concerning factor in regards to light degradable mulch film market is the lack of customer awareness for such products. Farmers are still on the verge of using non-degradable films, due to unavailability of much information from such key sources.

Another concerning factor in regards to light degradable mulch film market is the low rate of fragmentation for the degradation of the film. Crops varies in shape and size, and so are its leaves. Due to this variation, the amount of light varies in reaching the soil bed, where the light degradable mulch film is installed. This unequal rays of sunlight availability to the films results to lower fragmentation rate owing to unequal decomposition, leaving residues into the soil.

Light degradable mulch film market is largely affected by higher implementation cost, owing to the fact that the sources from which the films are made, are scarce in nature. Also, in the process of farming, due to unequal decomposition of the film, residues are left into the soil. The fields when ploughed, consumes more time of the farmer, owing to the filtration of these residues, either by man labor or machine, thus increasing the cost of production of the crop. These are the factors anticipated to limit the growth of the market throughout the period of forecast.

Asia-Pacific is expected to have largest market share on the back of rising demand for crop production and export from economies such as China, India, and others.

Further, North America is expected to gain significant market share owing to rising production of few specific crops, such as strawberry, corn, and others as these crops require special care and attention inhabited by light degradable mulch film soil bed. These factors are fuelling the growth of the market in the region.

The light degradable mulch film market is further classified on the basis of region as follows: