Extensive insights into the Growth of IPv6 Market amidst COVID-19

IP or Internet Protocol is referred to the set of rules that governs the format of data sent over the internet to other network. Any device connected over the internet, such as computers, mobile phones and others, need a numerical IP address in order to communicate with other devices.

IPv6 or Internet Protocol version 6 is referred to as an up gradation of IPv4 communications protocol. Developed by the Internet Engineering Task Force (IETF), IPv6 provides an advanced level of identification and location system for computers on networks and routes traffic across the internet. The technology is further divided into three addressing methods, viz. unicast, multicast and anycast, depending on the package delivery mechanism. IPv6 has numerical benefits over IPv4, such as, greater address length, increased packet size, and others. 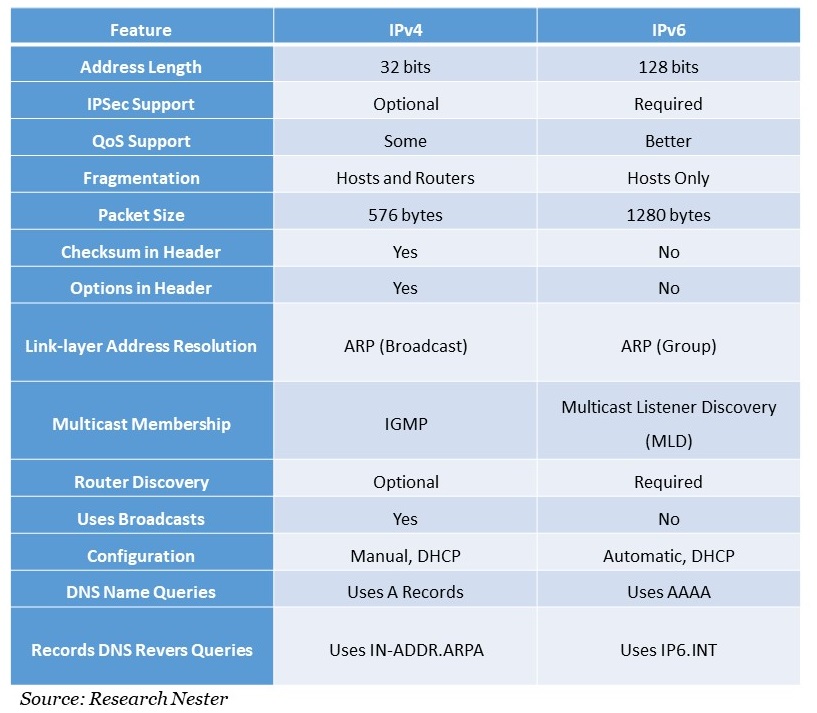 The IPv6 market is observing vibrant growth on account of growing unavailability of IPv4 addresses in the IPv4 address inventory pool and increasing waiting list for allocation of IPv4 addresses. Furthermore, increasing requests for IPv6 address and the growing allocation of IPv6 address assignments are some of the factors that are expected to boost the growth of the global IPv6 market. According to American Registry for Internet Numbers (ARIN), allocation requests for IPv6 grew from 380 numbers in 2014 and reached 623 numbers in 2018. Furthermore, initial IPv6 allocated grew from 248 numbers in 2014 and reached 406 numbers in 2018. CLICK TO DOWNLOAD SAMPLE REPORT 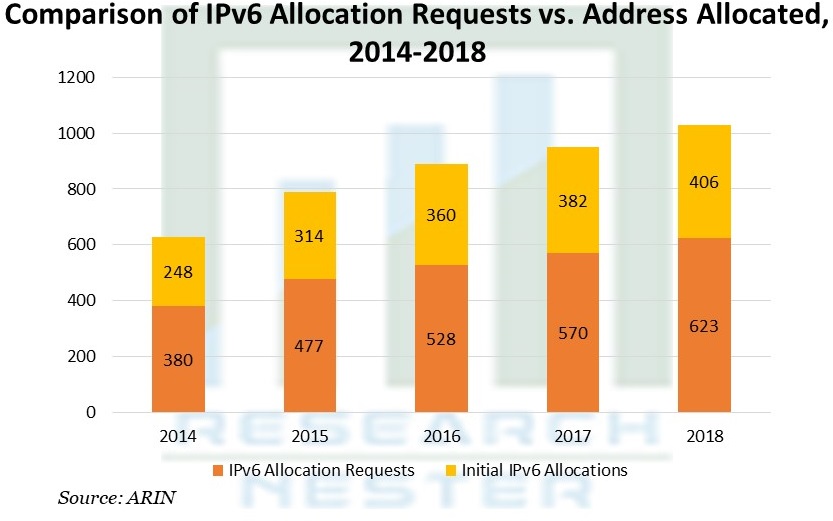 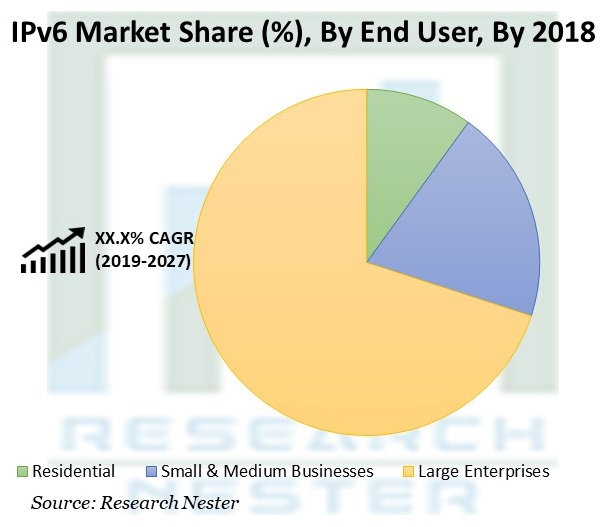 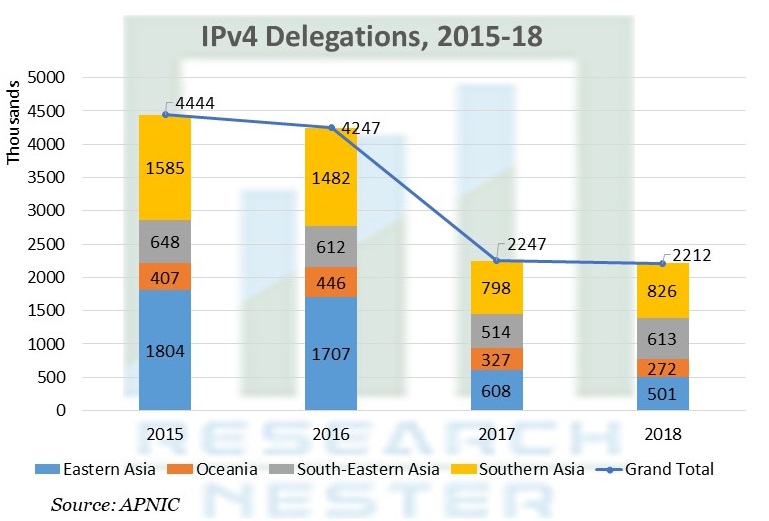 Decreasing delegations of IPv4 system is raising the demand for adoption of a new internet protocol numbering system amongst consumers. The raising demand for unavailability of allocation of IP addresses is also increasing the costs of IPv4. According to the North American Network Operators’ Group, a hypothesis which applies Hotelling rule to the cost of IPv4 and IPv6 addresses, anticipated that lowering availability of IPv4 will increase the cost of IPv4 systems, and will decrease the cost of IPv6 systems. The lowering costs of IPv6 in the near future and the expected declining phase of IPv4 system is anticipated to fuel the growth of IPv6 market throughout the forecast period. 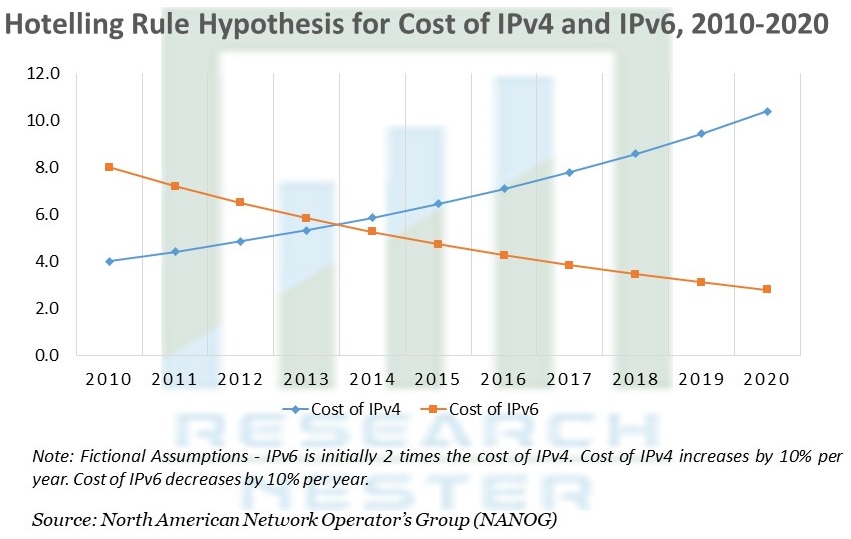 Majority of the equipment used for accessing the internet worldwide are based on IPv4 technology and are unsupported by IPv6 technology. Major shift towards IPv6 technology is expected to raise the deployment costs of consumers, which is anticipated to act as a barrier to the growth of the IPv6 market.

Our in-depth analysis of the IPv6 market includes the following segments:

Europe, Middle East and Asia-Pacific is expected to hold significant market share on the back of presence of numerous IT enterprises, followed by growing allocation of IPv6 addresses in the region. According to Internet Assigned Numbers Authority (IANA), the number of IPv6 address allocated in RIPE NCC region (Europe, the Middle East and Central Asia) was 935,955 numbers. APNIC (Asia Pacific) region constituted of 208,000 numbers.

Additionally, North America is expected to gain significant market share on the back of significant rise in demand for IPv6 addresses and its allocation by IANA. According to IANA, IPv6 allocations in ARIN (Canada, USA and some Caribbean Islands) constituted for 656,050 numbers. 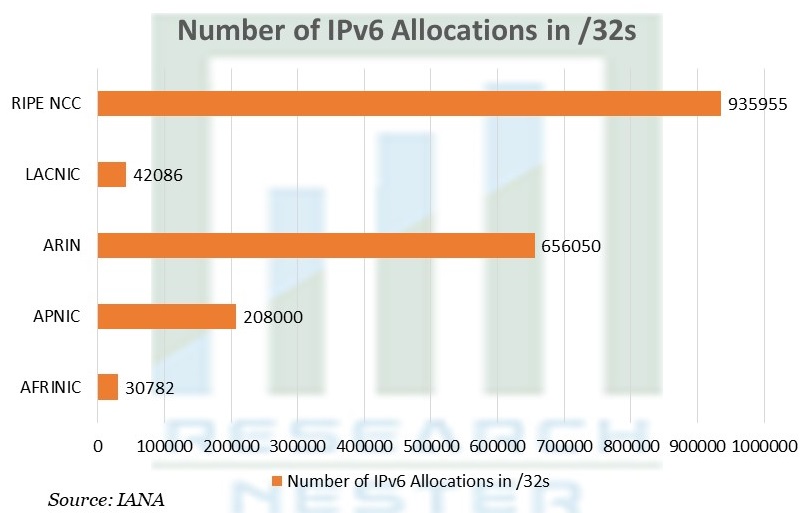 The IPv6 market is further classified on the basis of region as follows: