An Inertial Navigation System (INS) uses a computer-based system, and motion sensors, such as gyroscopes and accelerometers to calculate the dead reckoning position of an object. INS systems are used in navigation applications, in which accuracy and performance are of utmost importance, along with its size and cost.

Technology enabled advancements and innovation in military, and naval applications, such as Fiber Optic Gyro (FOG), Ring Laser Gyro (RLG), and Micro-Electro-Mechanical Systems (MEMS) has provided light and small inertial navigation systems. Some of the prominent players in the defense equipment business have in-house manufacturing facilities with limited applications. The gyroscope is used to measure the angular velocity of the frame with the sensor whereas, the accelerometer is used to measure the acceleration of the moving object in the frame. Based on this, one can identify the vehicle’s direction, whether it is moving backward, forward, left or right. By tracking both, the current linear acceleration of the system and the current angular velocity of the system relative to the moving object, the relative orientation of an object and its position can be derived.

INS systems have wide scale applications such as guided munitions, and commercial Attitude and Heading Reference System (AHRS) categorized under tactical use, games, medical, cameras, and computers under the consumer use. Other applications focus on automotive and navigational use of the systems. These systems provide better systems integrity and allow the navigation system to coast through short GPS outages with high accuracies. It expedites motion and rotation sensors to detect the position, orientation, and speed of movement of a vehicle.

The market is segmented by product type (navigation, tactical, commercial and marine); by technology (MEMS, fiber optic gyro, ring laser gyro, mechanical, and vibrating gyro); by application (naval, airborne, land, and commercial). Based on technology, MEMS segment is anticipated to observe highest growth attributed to technological advancements that are resulting in its enhanced applicability for unmanned and small aircrafts. Increasing usage of satellite positioning for commercial application to boost the INS market growth. As stated in Boeing Market Outlook 2016, the world requires 41,039 new airplanes in next 15 years which happens to be approximately 3% increase from the current capacity and the value of the orders is calculated to be USD 6.1 trillion. CLICK TO DOWNLOAD SAMPLE REPORT 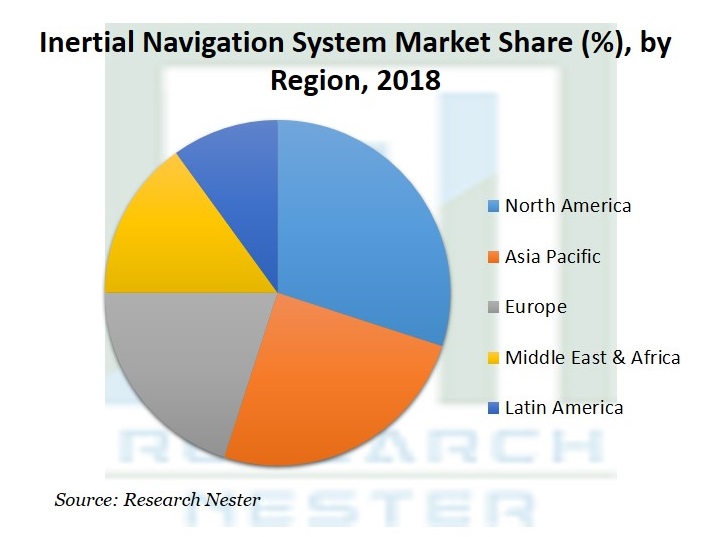 The rise in trans-national conflicts has led to rising defense expenditure in various emerging countries. Countries are investing in the advancement of missile systems, such as ballistic missiles, and cruise missiles, among others, which require INS systems for guidance. Moreover, system integration with commercial self-driving vehicles are expected to equally influence the overall growth of market during the forecast period. Factors such as growing passenger air traffic and rise of positioning system in commercial vehicles is expected to augment the demand for INS. With the use of MEMS, manufactures have industrialized cost-effective and more efficient solutions resulting in light, small, and low-cost navigation systems.

North America is anticipated to dominate the market share on account of growing air traffic and technological advancements coupled with favorable regulations by the Federal Aviation Administration (FAA). Leading missile and aircraft manufacturers, like Boeing (US), Lockheed Martin (US), Bombardier (Canada), Bell Helicopter (US), and Sikorsky Aircraft (US), among others, are based out of this region, and generates high demand for INS systems.

Asia Pacific is anticipated to grow at the fastest CAGR owing to launch of many programs related to INS systems. Countries such as China and India are expected to boost the growth on the back of rising defense budgets to develop homegrown technologies for naval vessels, warships, and defense aircrafts.

The inertial navigation system market is further classified on the basis of region as follows: