Helicopter simulator is a device that artificially creates aircraft flight and the environment in which it flies, for the pilot training, design and other purposes. It involves imitating the equations that administer how the aircraft fly, how they would react to the applications of flight controls, the effect of other aircraft systems and how the aircraft would react to the external factors such as air density, wind shear, cloud, precipitation, turbulence, etc.

It is used for a various reason such as flight training for pilots, research of aircraft characteristics, development of aircraft and control handling qualities. It provides training to the pilots in the most extreme conditions, which would not have been done through regular training. Various devices are used in modern flight training such as Cockpit Procedures Trainer (CPT) is used in practicing basic cockpit procedures for instance, cockpit familiarization and processing emergency checklist. Many aircraft systems may or may not be simulated.

Increasing demand for trained pilots in civilian market who are required for general jobs for instance, emergency medical services and commercial flying, rising need for safety and cost effectiveness in the aviation sector, fluctuating fuel costs and minor maintenance and repair costs are factors contributing to the growth of the market. There are number of contracts that have contributed towards the growth of the market such as in 2016, Flight Safety International had signed an agreement with Airbus in order to provide training to Helicopter EC145 operators.

The market is further segmented by component into full flight simulator, fixed based simulator & classroom trainers out of which, full flight simulators segment is expected to have leading shares owing to increase in the demand for cost effective simulation systems. They provide realistic flying experience to the pilot and provides movement in all six degrees of freedom (DOF), 3 rotational, 3 linear or translational that can be experienced by any object which is free to move. The movement is in sync with the visual display of helicopter training site that provides full-fidelity helicopter training.CLICK TO DOWNLOAD FREE SAMPLE REPORT

In the recent years, the regulatory requirement and the processes for pilot certification has become stringent owing to this, there has been a growth in the number of certified pilots. The increasing need for trained pilots is creating a demand for helicopter simulators. Rising emphasis on the safety of pilots during the training has led to the adoption of simulators for pilot training and ultimately driving the growth of the market. New developments and innovations in the market have contributed to the growing demand for helicopter simulators customized according to the respective control systems.

Simulator based training services has gained popularity as they help the pilots in their aircraft flying training. The regulatory authorities in the aviation industry of the countries have made the use of helicopter simulators for the new pilots. However, the investments have increased to a large extent in the development of helicopter simulators, thus propelling the growth of the market during the forecast period.

The manufacturing cost along with the on-going operation and maintenance cost is very high that may lead to limited adoption of the technology. Moreover, there is a limited physical environment for the implementation of helicopter simulators. These factors are anticipated to restrict the growth of the market during the forecast period.

Currently, North America dominated the market with maximum market share and is anticipated to continue its dominance on account of having the highest military power and commercial helicopter fleet in the world. Asia Pacific region is anticipated to witness significant growth owing to increasing procurement of helicopters especially for military in various countries such as India, China, South Korea and Japan. Moreover, helicopter accidents during the training have increased to large extent in countries such as India and this has made the countries to emphasize more on simulator-based training for helicopters. 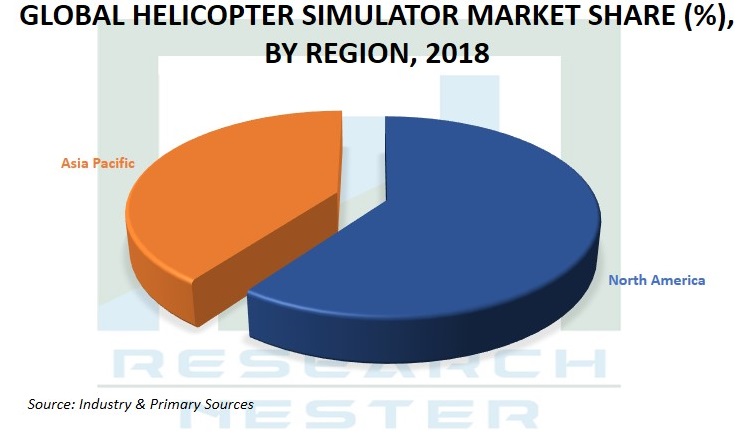 The global helicopter simulator market is further classified on the basis of region as follows: