The global chlorhexidine gluconate (CHG) wipes market is observing vibrant growth on account of increasing cases of hospital-acquired infections coupled with surgical site infections. Rise in the geriatric population followed by increase in the number of surgical procedures are an important factor which is supporting the growth of the market. Enhancing awareness regarding chlorhexidine gluconate wipes for reducing harmful bacteria’s from the body is also a factor which is expected to propel the growth of the market. Rise in investments in the healthcare sector and highly developed technology are some of the factors which are anticipated to bolster the growth of global chlorhexidine gluconate wipes market over the forecast period.

Chlorhexidine gluconate wipes market is anticipated to record a CAGR of 4.56% over the forecast period. The chlorhexidine gluconate wipes market is expected to showcase a vibrant growth by the end of the forecast period. The market is segmented into distribution channel such as hospital pharmacies, retail pharmacies and online platforms out of which hospital pharmacies are expected to showcase the largest market share on account of increasing cases of hospital related infections and post-operative infections. Hospital acquired infections such as catheter-associated urinary tract infection (CAUTI) and surgical site infections (SSI) are the common infections which are supporting the growth of the market. 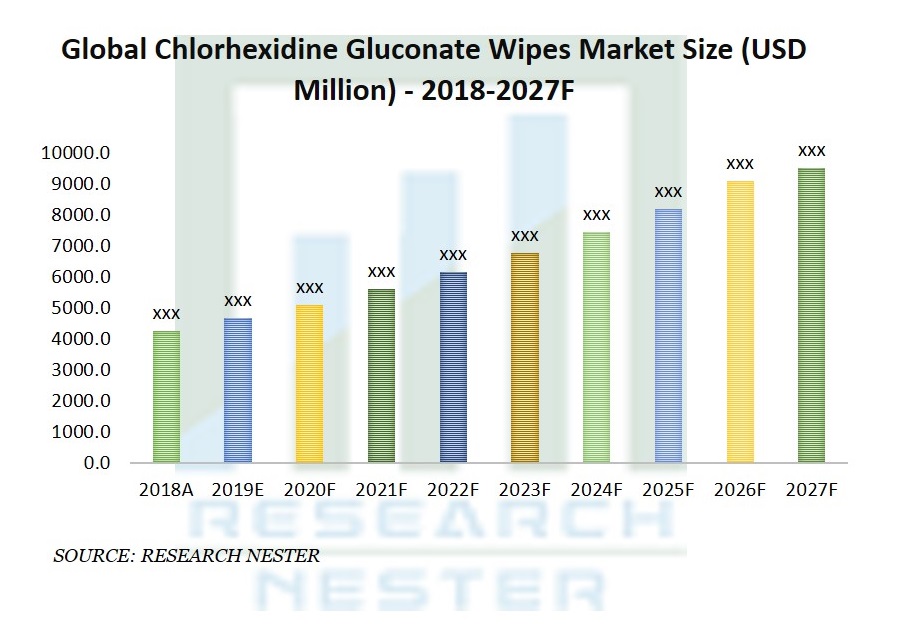 Cather associated urinary tract infections (CAUTI) is the common hospital acquired infection. According to the report by World Health Organization (WHO), CAUTI accounts for approximately 40 percent of all hospital acquired infections. Risk of acquiring catheter associated urinary tract infections enhances with the increase in the duration of stay in a hospital. On account of such factors, it is expected that the demand for wipes or napkins especially for urinary catheterisaton is going to increase over the forecast period.

The risk of acquiring hospital associated infections enhances linearly with increasing age. Older people who are admitted in the hospital for a longer duration of stay are more susceptible to a variety of different infections. Hospital acquired infection such as urinary tract infections and skin related infections are more common to the geriatric population. These infections can be effectively prevented by adopting anti-infection products which includes sterile wipes and tissues. According to World Bank, total geriatric population was 8.482 percent of the overall global population in 2016 which enhanced to 8.696 percent of the total population in the year 2017. This rise in the geriatric population is anticipated to increase the demand of chlorhexidine gluconate wipes which is further expected to support the growth of global chlorhexidine gluconate wipes market over the forecast period.

Europe is also expected to have the largest market share on account of rising case of surgical site infections (SSI) coupled with rising geriatric population. Asia Pacific region is expected to be the fastest growing region on the back of large pool of patient population and growing medical facilities.

Global chlorhexidine gluconate wipes market is further classified on the basis of region as follows: