Airport baggage screening system is a type of screening system that is used to monitor or check the baggage with the help of electronic devices. These systems are used at an airport where the luggage is properly examined before it passed on to the aircraft. Screening systems have acquired huge recognition across the world as security concerns are rising among population. It has been observed that the manufacturers are putting more emphasis on the technological advancements in the baggage screening systems. This emphasis is due to the fact that operations can be effectively carried out and the performance of an airport can be enhanced. With the development of new airports, the function of baggage screening systems has eventually become more important. With the increasing security concerns and the failure of the metal detectors to detect non-metallic objects and explosives are forcing many airports to implement advanced screening technologies and procedures. These technologies are implemented to screen the baggage and luggage for explosives and non-metallic weapons.

The global airport baggage screening system market is anticipated to project a CAGR of around 6% over the forecast period i.e. 2019-2027. The growing demand for air travel and the increasing air traffic is expected to drive the growth of the market. The manufacturers of these screening systems are increasingly focusing on the development and provision of efficient baggage screening systems. The improvement of the existing baggage screening processes can simultaneously support the performance and efficiency of an airport. Before 2011, three types of attacks on aircraft were very common, i.e. hijacking, bombing, and robbing. In all three types of attacks, the civil aircraft, with people and goods aboard, was the major target. As a result, screening systems were introduced for better safety. According to the U.S. Department of Transportation (DOT) passenger-volume forecasts, combined with the Transportation Security Administration (TSA) historical and forecasted passenger-screening statistics, it was anticipated that the security screening systems will grow by 3.5 % in 2018, as compared to 2017. CLICK TO DOWNLOAD FREE SAMPLE 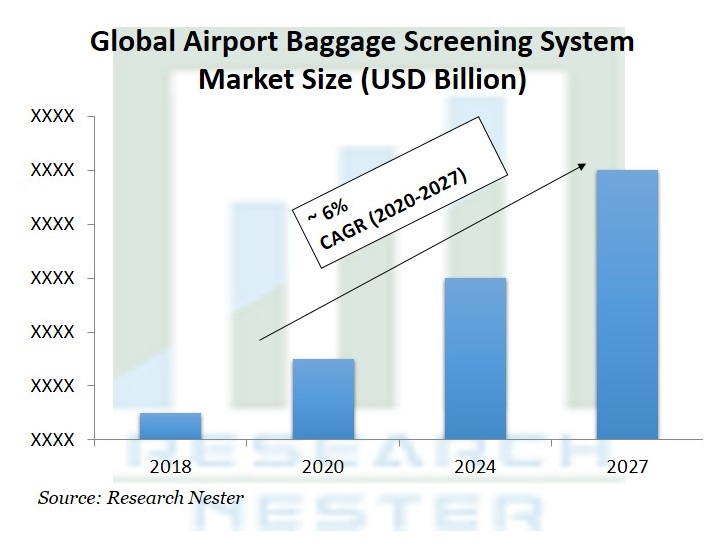 The smart security initiative aims to minimize passenger delay and maintain advanced levels of security at checkpoints in airports. Airports are incorporating innovative and advanced technologies to improve the flow of passengers and bags throughout checkpoints. Nowadays, many airports have adopted advanced carry-on baggage X-ray machines, new throughput processes, and pre-airport checks with a goal to detect explosives or non –metallic objects in the airports. The addition of such IT technologies in the airports have attracted new investments in the market.

The high costs associated with the screening systems pose a significant threat to the market growth. Their high installation costs and their regular maintenance and upgrade restricts the market growth over the forecast period. The airport baggage screening system market is highly competitive with all the players competing to gain major market share. The vendors compete on various factors, they compete based on cost, product quality, reliability, and aftermarket service. It is very challenging for the vendors to provide cost-efficient and high-quality airport baggage screening systems, to survive and succeed in an intensely competitive market environment.

This becomes a challenge for the new players in the market, and the challenging factor for the growth of airport baggage screening system market.

North America airport baggage screening systems market is anticipated to witness a fast growth on account of existence of major market players in this region. Over the years, there have been high investments on the airport security systems in the region, due to the growing number of attacks and terror threats across the globe. North America is one of the leading regions in the airport baggage screening systems market and estimated to maintain its dominance over the forecast period.

Asia Pacific is also expected to witness significant growth in airport baggage screening system market on account of increasing expenses on the development and up-gradation of airport infrastructure in the region. There have been many terrorist threats in this region, which have compelled the governments to improve their security measures. Attributed to all these factors, region has become very profitable for the companies that manufacture airport baggage screening systems.

Global airport baggage screening system market is further classified on the basis of region as follows: