Aircraft avionics include navigation, communication, display and management of various systems and more than hundreds of such systems are fitted in an aircraft which perform various individual functions. These systems can be simple as well as complex. Basically, the term avionics is a combination of the word aviation and electronics. The cockpit of an aircraft is the main location for the placement of the avionic equipment such as control, monitoring, communication, weather, navigation and anti-collision systems. Most of the aircrafts, power their avionics using 14 or 28 volt DC electrical systems, whereas aircrafts such as airliners or military combat aircrafts have AC systems operating at 400 Hz, 115 volts AC.

The Joint Planning and Development Offices has designed the roadmap for avionics in six areas which publishes routes and procedures i.e. improvement in navigation and routing, negotiated trajectories i.e. addition of data communications to create preferred routes, delegated separation i.e. enhancing the situational awareness on the bottom and within the air, permitting operations with weather constraints with less ground infrastructure.

The aircraft avionics market is anticipated to record a CAGR of around 4.86% over the forecast period i.e. 2019-2027. The market is segmented by platform, aircraft type, system and end user. By platform, the commercial aviation segment is anticipated to have significant growth on account of manufacturers who are currently focusing on avionics components to develop products which are more efficient, reliable and accurate. With continuous improvement in the software technologies, the work has become more user-friendly and helped in automation of various in-flight tasks to reduce the workload of the flight crew.

Need for up gradation

With the continuous advancement in technology coupled with rising demand for aircrafts, there has been a demand for upgradation of software. Various developing economies are emphasizing on to strengthen their armed forces with the help of new technologies which is expected to boost the growth of the aircraft avionics market in the near future.

With an increasing demand for aircrafts, there has been a need for technological advancements in the navigation system to ease the work of the flight crew and also to streamline the operations. Various developing economies are stepping towards adoption of next- generation aircrafts which is expected to boost the growth of the aircraft avionics market.

Every economy functions differently and has different economic conditions which affects the cost of all the operations or steps to be carried out to cater to the budding needs of the market which leads to delay in the supply chains, thereby proving as a hindrance for the growth of the aircraft avionics market. Due to delay in supply chain from the initial stage, the whole process gets delayed thereby leading to late deliveries of the avionics to the required platforms which is anticipated to hamper the growth of aircraft avionics market.

North America is expected to grow at a rapid pace on the back of increase in the number of deliveries of wide-body and narrow body aircrafts in the region. Further growing commercial applications and their utility in the defense sector to carry out the surveillance and transportation activities in the region is likely to boost up the growth in the region. Europe market is projected to expand owing to increasing commercial applications of the aircraft avionics in the region. Asia Pacific is expected to grow substantially attributing to its increased demand in the defense sector in order to strengthen the position of the armed forces and up-gradation of the existing technology in the region. 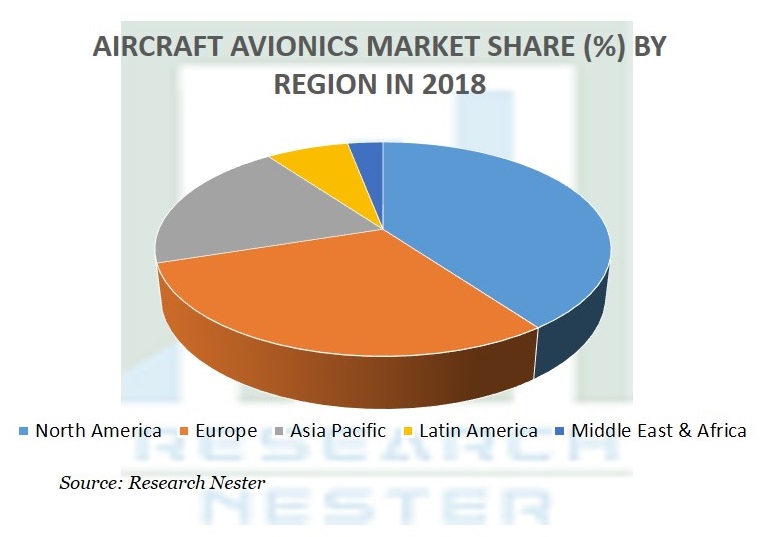 The aircraft avionics market is further classified on the basis of region as follows: