Aquaculture, or fish farming, is the process involving production of a large number of fish for the purpose of consumption by people. Increasing consumption of fish has led to a rapid growth of the aquaculture industry. As per the Food and Agriculture Organization of the United Nations (FAO), the global fish production rose to 171 million tonnes in 2016, out of which, 43% share was represented by aquaculture. This share went up to 53% when non-food uses of fish were excluded. Fish vaccines are given to the fish being commercially farmed in order to prevent any bacterial or viral infection among them. This is done so as to avoid the spread of various diseases among fish and to increase the quantity produced during aquaculture. Recent advancements in technology have observed a growth in research and development activities for the production of advanced vaccines which provide a faster immune response among fish, thereby enhancing their infection-resistant properties.

Immersion vaccination is a method of mass vaccination of fish that is performed by submerging large groups of fish in the vaccine, which is then absorbed by the skin and gills of every fish, resulting in generation of vaccinated fish. Once the procedure is completed, the fish produces antibodies against various antigens present in the vaccine, thus shielding them from any future risks of infection. The process is highly favorable since it is requires less time and has high potency. The type of fish being used and its size are the aspects taken into consideration while performing vaccination through immersion procedure. These factors are anticipated to significantly increase the growth of market during the forecast period. 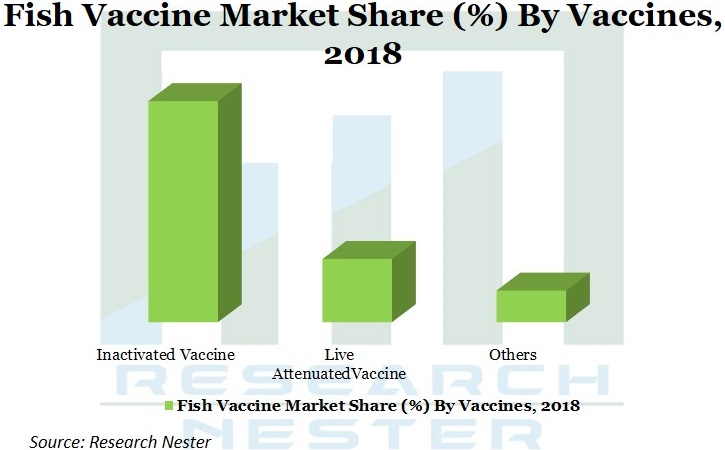 Growing Demand For Vaccines To Boost The Market Growth

Rising infection followed by occurrence of diseases among fish species is a significant growth factor estimated to raise the demand for fish vaccines in the aquaculture industry. In addition, vaccines are natural biological products that do not leave any harmful residue in the environment, thereby estimated to be increasingly preferred over antibiotic drugs. Moreover, the growing development of highly advanced vaccines for the treatment of various fish diseases and infection is anticipated to further escalate the demand for effective vaccines for fish culture. These factors are anticipated to considerably drive the market growth.

Strict Policies For Approval Of Vaccines To Restrict The Market Growth

Our in-depth analysis of the fish vaccines market includes the following segments:

Fish vaccines market in Europe is anticipated to significantly grow during the forecast period as countries such as Norway are projected to grow with a substantially high CAGR. This can be attributed to the increasing consumption of fish in the region. The market in North America is estimated to hold the leading share in fish vaccine market on account of rising fish farming activities in the region, especially Canada, which raises the demand for better farming techniques and large scale fish production. According to UNESCO Institute of Statistics, the expenditure on research and development in Canada was estimated to be around 1.52% of GDP in 2017. Similarly, research and development expenditure in the United States was reported to be 2.74% of GDP in 2016. The use of fish vaccines in the region is estimated to grow substantially as a result of these factors. Fish vaccines market in Asia Pacific region is estimated to observe a notable growth rate. This can be attributed to the growing production of fish as well as increasing measures taken in order to protect them from diseases, mainly in countries such as China.

The fish vaccines market is further classified on the basis of region as follows: