Ferro Vanadium is classified under the group ferroalloys. Ferrovanadium is an amalgam which is delivered by the blend of vanadium and iron. Ferrovanadium is significantly utilized in the assembly of steel. The products that comprise of Ferrovanadium have a minimized risk of corrosion. In addition, it helps in advancing fine grain size and expanding hardenability through precipitation of nitrides and carbides. Ferrovanadium is fabricated utilizing an electric circular segment heater in which scrap press is softened at first and afterward it is joined with the blend of aluminum and in addition motion, for example, calcium fluoride and calcium oxide. It is generally provided in bed confines or psychologist enclosed by super packs.

The global market is expected to showcase a significant CAGR of 4.8% during the forecasted period 2018-2027. Additionally, the global Ferro Vanadium market is thriving on the back of hardened steel application in the manufacturing of bicycles frames, axles, crankshafts and other highly critical steel components. Thus, the rapidly expanding steel industry is anticipated to bolster the overall growth in the demand for the Ferrovanadium. In terms of regional platform, demand for Ferrovanadium in the Asia Pacific region is anticipated to propel the growth of overall global Ferrovanadium market over the forecast period. Development of effective production technologies such as aluminothermic reduction for the scale-up is reducing the cost and time required of ferrovanadium production. Existence of enormous mining facilities of vanadium in China is projected to enhance the growth in the overall production of Ferrovanadium. Europe is anticipated to contribute a significant CAGR during the forecast period. Increasing automobile manufacturing and heavy metal industry are some of the key factors which are driving the growth of Ferro Vanadium market in Europe region. In the year 2018, companies such as Bushveld Minerals Ltd reported a strong increase in vanadium production in order to address the increasing demand. Similarly, production from Vametco in the first three months of 2018 was reported to be 731 metric tonnes of vanadium, up 36% on the previous quarter. The production of Ferrovanadium is expected to showcase a steady growth in the production of steel.CLICK TO DOWNLOAD FREE SAMPLE

Our in-depth analysis segmented the global Ferrovanadium market in the following segments:

Global Ferrovanadium market is further classified on the basis of region as follows: 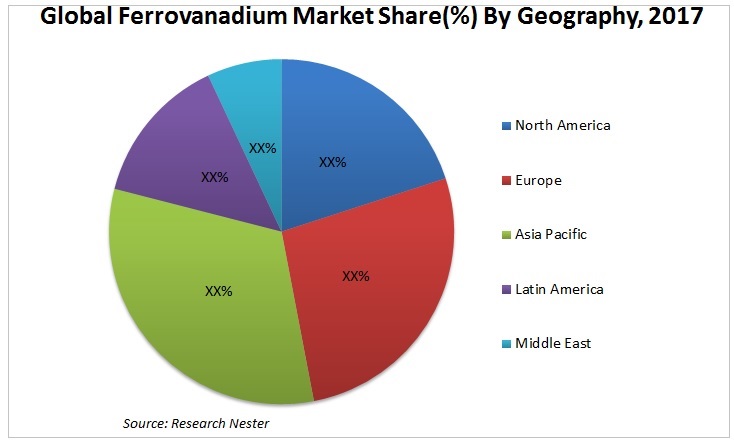 The real utilization of the Ferrovanadium that is being made during the time spent alloying that is utilized in the assembling of the solidified steel. Hardened steel is utilized in the applications, for example, in the assembling of bikes outlines, axles, crankshafts, and other exceptionally basic parts of steel. Along these lines, the modern advancement of the steel business will trigger the production of the Ferro vanadium. Ferro Vanadium is generally utilized in the assembling of the high carbon steel composite. This high carbon steel is utilized in the generation of the therapeutic apparatuses. When vanadium is alloyed with titanium, they find their applications in various sectors such as rapid airframes and stream motors. The general weight of the steel is decreased by utilizing Ferro vanadium; thus, it is utilized in the assembling of the vehicles that are light in weight. Vanadium is sold as vanadium pentoxide (V2O5) and less commonly as vanadium trioxide (V2O3) for non-steel applications and as the alloy ferrovanadium (FeV) for steel making. The most common FeV alloy is FeV80, but FeV40, FeV50 and FeV60 are also commercially available. The United States Geological Survey has estimated that world economic reserves of vanadium are about 14 million tonnes (Mt). China and Russia each hold about 8% of the world’s vanadium economic resources, followed by South Africa with 6%. Australia has the Economic Demonstrated Resources (EDR) of 1.68 Mt and it accounts for approximately 2.7% of the world’s vanadium economic resources. However, as vanadium can also be recovered as a by-product or a co-product of steel slags, the present global estimations cannot be considered as a complete indicative of the available supply. The Geoscience Australia has predicted that the currently available naturally available resources are sufficient to address the global vanadium demands till the next century.

In contrast, increasing cost of raw materials is expected to negatively affect the global market of ferro vanadium. It was observed that in the year 2017, the cost of vanadium increased rapidly, reaching a peak in May. This was primarily due to various production constraints among the prime manufacturers in China. In August 17, the Chinese Ministry of Environmental Protection has forbidden the import of vanadium into China under new trade regulations.