Dry ice refers to a type of ice that is used as a refrigerant to keep things cold in medical and food industries and generate clouds of smoke in stage shows in entertainment industry. It is a form of solid carbon dioxide that does not leave any residue. It is called dry ice because of the process of sublimation, where upon heated it changes directly into a gas instead of melting into liquid.

Dry ice is non-combustible and non-toxic in nature as compared to other forms of refrigerants. Dry ice finds its usage in industrial sector for conserving frozen foods where mechanical cooling is unattainable and also in industrial cleaning with the help of dry ice blasting method which cleans contaminants like ink, dirt, mold release agents, paint, oil, and glue among others. This method is a proficient and cost efficient way for industries to hone quality and production capability. It also finds its applications in restoration of buildings that are damaged in fire accidents. 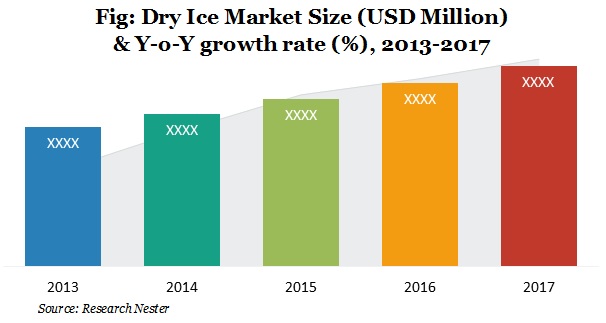 Our in-depth analysis of the dry ice market includes the following segments:

By End Use Industry Type

Dry ice market is further classified on the basis of region as follows: 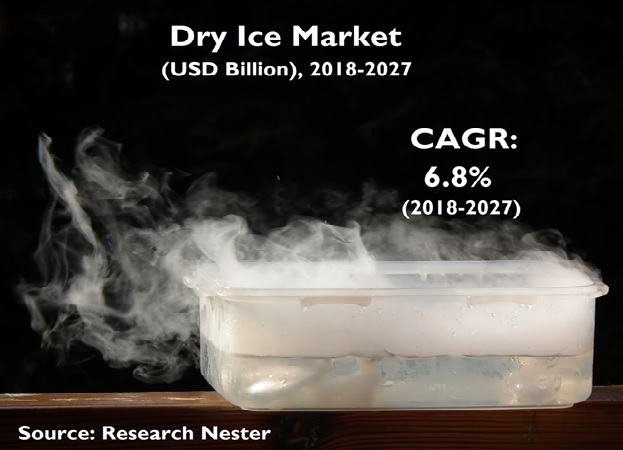 Dry ice market is anticipated to witness a steady growth during the forecast period. This can be attributed to the use of dry ice for industrial cleaning for clearing out contaminants like ink, mold release agents, paint, glue and different forms of dirt among others with the help of dry ice blasting method. Dry ice is a cost effective method that is likely to bolster the demand of dry ice market in the near future.

Due to rising fire accidents, there is surging need for restoration of residential and industrial buildings. Dry ice can be used for renovation in such cases furthering the growth of dry ice market. Factors such as these combined with its non-toxic and non-combustible properties are anticipated to boost the market growth by the end of forecast period.

However, inability for long term storage might deter the growth of dry ice market.