Drones are unmanned aerial systems, which can be controlled by remote or self-automation software. Drones are majorly used for applications such as anti-aircraft target practice, intelligence gathering, and others. Drones are used in a wide range of applications in commercial sector as well, such as for traffic monitoring, photography, agriculture, transport & logistics, entertainment and media, and energy & utilities.

The global drones market is thriving on the back of opportunities created by the launch of new, advanced and cost-effective drones in the market, coupled with the increasing application of drones across end user industries and the increasing research and development activities in the manufacturing of drones that is promising a varied range of drones that can be applied in several new sectors. The global drones market accounted for a value of USD 18.11 billion in the year 2018 and is expected to grow at a CAGR of 19.90% over the forecast period, i.e. 2020-2027. The market is further slated to achieve a market value of USD 88.57 billion by the end of 2027.

The global drones market is segmented by regions into North America, Latin America, Europe, Asia Pacific and Middle East and Africa. Among these regions, the market of North America is anticipated to hold the largest market share of around 39.0% in the year 2027. The market in the region is expected to garner a CAGR of around 19.38% during the forecast period and attain a market value of USD 34.58 billion in the year 2027. Moreover, Europe is anticipated to gain significant market share on account of increasing sales of drones in the region along with several other factors, such as favorable regulations by the government, exploration of new techniques to transform and leverage conventional business processes to automated processes and increasing commercial applications of drones on the back of enhanced operational efficiency of drones. 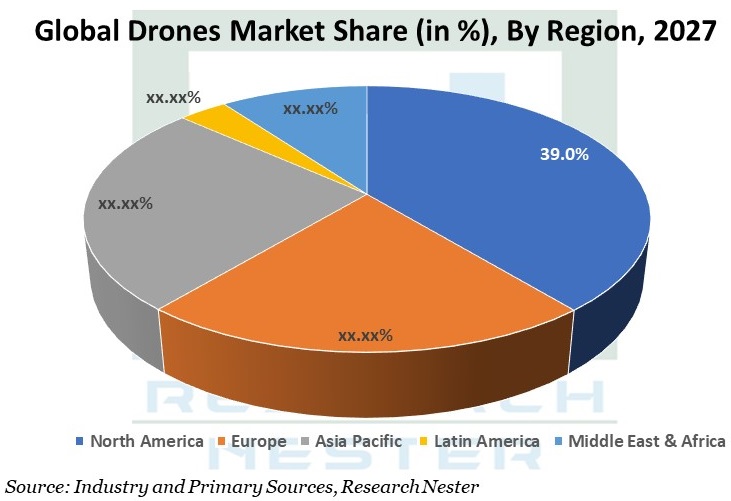 The global drones market is segmented on the basis of product type into military drones and commercial drones, out of which, military drones segment is anticipated to hold the largest market share in the year 2027. The segment is further anticipated to garner a CAGR of around 19.60% during the forecast period and attain a market value of around USD 59.45 billion by 2027. Moreover, commercial drones segment is anticipated to attain a significant market share on the back of increasing application of drones in different sectors, such as entertainment, agriculture, energy and others. Initially drones were viewed as a military device, but with time ahead, it has established a significant presence in the commercial sector. Moreover, with the advent in technologies, it has made possible for drone manufacturers to produce a wide range of models making them useful across varied applications.

Business entities around the world are always exploring for opportunities that can help them gain a larger market share and stay ahead in competition. With the advent in technology, drones in the recent era have found ample utilization in sectors such as oil and gas, construction, energy, entertainment, healthcare and several others. Companies have also found out ways to minimize human interaction in their service delivery processes by incorporating drones and other related technologies. For instance, several e-commerce companies have invested for the implementation of drones in the delivery of goods and services. Moreover, in sectors such as mining, construction and aerial mapping, utilization of drones has contributed significantly in improving the quality of services of the competitors in the industry. The increasing application of drones across different sectors and the efforts of numerous companies to improve their services by the utilization of drones are some of the factors anticipated to drive the growth of the global drones market during the forecast period.

According to the World Bank, military expenditure as a percentage of GDP for the year 2018 in the Russian Federation constituted to 3.93%. Moreover, United States constituted to 3.16%, France for 2.29% and UK for 1.78% 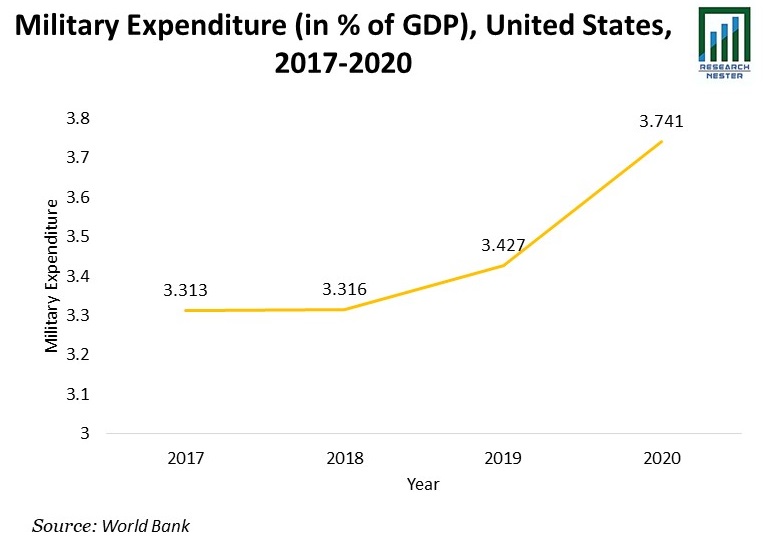 Rise in military spending and defense budgets by government of nations around the globe are offering drone manufacturers to develop and innovate specialized drones. Many software companies are also collaborating with the drone manufacturers to develop software that helps to enhance the efficiency of the drones thereby creating tremendous opportunities for application in military operations. For instance, UAVs outfitted with thermal imaging cameras provide emergency response teams with an ideal solution to identify victims who are difficult to spot with the naked eye. Apparently, development in the technology of cameras is also significantly influencing towards the growing usage of drones in military applications.

Several security concerns associated with drone operations is resulting in a contentious debate amongst industry stakeholders and big companies along with the governments of nations across the world for the changing drone regulations. Strict airspace regulations across major countries along with the lack of international, regional and local regulations for the safe operations of UAVs in many nations around the world are some of the factors anticipated to act as key restraints to the growth of the global drones market during the forecast period.