Extensive insights into the Growth of Drone Market amidst COVID-19

Drone is a flying robot commonly known as unmanned aerial vehicles (UAV) which can be controlled by remote or self-automation software. From past few years, drones were often used for military practices such as anti-aircraft target practice, intelligence gathering and others. Now-a-days drones discovered their wide range of application in commercial sector such as traffic monitoring, weather monitoring, fire-fighting, search and rescue operations, drone-based photography, as well as agriculture and delivery services. With the emerging market of drones, drone education is also expanding. Various universities across the globe are now offering bachelor degree in Unmanned Systems Applications, these emerging trends in the drone technology will further spur the demand for drones across the globe.

Global drone market is anticipated to reach USD 25 billion by the end of 2023 witnessing a compound annual growth rate of 18.2% over the forecast period owing to the significant use of drones in various sectors. Geographically, North America is anticipated to have the upper hand over the global drone market owing to the increasing production and wide application of drones in commercial sector. Europe is estimated to be most attractive market in terms of profit over the forecast period. In Canada, drones are mainly used for atmospheric monitoring including atmospheric gas sampling and oceanographic research.

In terms of volume, nearly 4 million commercial drones are sold in 2015. The number of sold units is anticipated to expand exponentially over the forecast period reaching 18 million a year by 2023. Drones are widely used for pest detection, search and rescue of mammal species, volcanic monitoring, pollution monitoring and others. The growing trend of adoption of drones in various activities will establish numerous opportunities for the drone’s manufacturers in the global market. Drone manufacturers in the market are focused on providing comprehensive design with functionality and safety to ensure the best performance and creative appearance. CLICK TO DOWNLOAD FREE SAMPLE REPORT 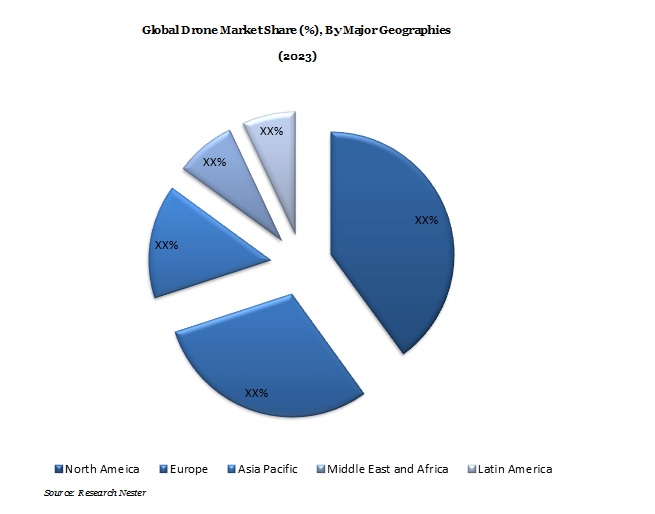 Deep dive study has been carried out on the following product segments:-

Depending upon the payload capacity of drones, the market is further segmented into following categories:-

On the basis of component used in drones, thorough study has been carried out on the following categories:-

By end use application, the market can be segmented in to following categories:-

Global Drone Market is further classified on the basis of region as follows:

Increasing use of drones in commercial sectors such as media and entertainment, inspection, monitoring, surveying and mapping is fuelling the demand for drones across the globe. Government all over the world are also implementing drones in public safety services, drones are widely used by law and enforcement agencies for surveillance. Drones are also used in infrastructure, scientific research and R&D, environmental studies, and disaster management activities. The wide range of application of drone will further intensify the market growth over the forecast period.

E-commerce and retail industry is working on the using drones in order to deliver product to the customers in a minimum time. However such projects are held back by government bodies in order to ensure public safety. Additionally, Drones are widely used in agriculture sector to produce higher yield by regular crop monitoring. Key market players are making huge investment in R&D activities to develop solar powered drones for agricultural application. This will further boost the demand for drones in agricultural sector. Government regulations regarding the violation of privacy policies are considered to be the major restraint in the global drone market.