Diabetes monitors are medical instruments which monitor blood glucose concentration and among the most common methods are self-monitoring methods. In this method, a small drop of blood is taken out from the finger and is applied on the glucose test strip and a glucometer. The non- invasive glucose monitoring is done by taking other biological samples which includes sweat, urine, breath, ocular fluid or saliva. This method is called non-invasive continuous monitoring. For real time monitoring of blood glucose concentration, the Continuous Glucose Monitoring (CGM) method is adopted as it is one of the most advanced method. Self-monitoring of blood glucose is preferred widely by many diabetic patients as it is economical and less complex to use.

The global diabetes monitors market is observing vibrant growth on the account of increasing number of diabetic population worldwide which can be attributed to increasing obesity, age, unhealthy lifestyle and eating habits etc. Additionally, huge investment in research in the field of diabetes control and treatment combined with growing technological advancements in diabetes monitors are some of the significant factors that are also fueling the growth of the market and are further anticipated to boost the market revenue in upcoming years. 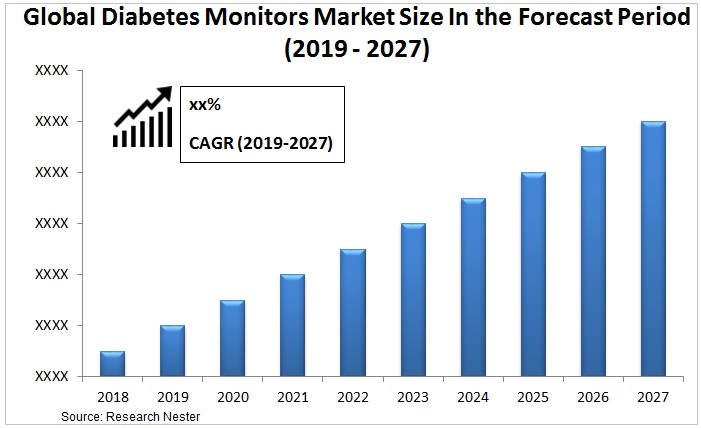 There is a rise in the diabetic patient pool worldwide every year. For a diabetic patient, it is mandatory to monitor the blood glucose concentration, where diabetes monitors play an important part in monitoring it. According to International Diabetic Federation, 425 million people are suffering from diabetes across the globe with 82 million people in the Southeast Asia Region and by the year 2045, this will rise to 151 million. As a result, these statistics of diabetic population around the world are estimated to play as a valuable factor behind the growth of the market during the forecast period.

Increase in the Geriatric Population

The increase in the geriatric population is contributing to the increase in the diabetic population across the world due to the hormonal changes and impaired glucose regulation that takes place as a person gets old over the years. According to the National Institute of Health (NIH), older population across the globe is expected to grow in an unprecedented manner. 8.5% of the total world population (617 million) are aged 65 and over. According to the latest report, this percentage is anticipated to increase approximately 17% of the total worldwide population by the year 2050 (1.6 billion). Therefore, this growth in the diabetic population with respect to the rising rate of elderly people across the globe is estimated to augment the growth of the market over the forecast period.

Diabetes monitoring devices are very expensive and not at all economical for most people as they need to be replaced after every 8-10 months. As it is not a financially viable option, the growth of the market might be negatively affected during the forecast period.

North America is anticipated to lead the market owing to large population of patients and high healthcare expenditure. As the prevalence of diabetes is increasing, governments and other organizations are actively participating to improve its treatment methods. Further, Europe is expected to hold the second position in the overall market of diabetes monitors due to higher investment in the research and development along with boom in technology advancement in the field of diabetes. Furthermore, Asia Pacific region is also expected to show a faster growth on the back of growing number of diabetic patients and increasing technological innovations across the region.

Global diabetes monitor market is further classified on the basis of region as follows: