Lung cancer is a common form of cancer that affects the respiratory organs and mainly develops as a result of smoking. At a global level, more than 7 million people die from tobacco smoking every year. If the current trend of smoking continues, more than 8 million deaths are estimated to occur worldwide by 2030 as per the Centers for Disease Control and Prevention.

Radiation therapy or radiotherapy is a method of treating various forms of cancer by delivering beams of high-energy particles or waves to the target area. This cancer treatment method is non-invasive in nature and destroys cancer cells without causing much harm to the surrounding normal cells. The CyberKnife system is a new and improved technique of radiotherapy that uses a procedure known as stereotactic body radiation therapy (SBRT) which allows it to perform even complex radiation therapy without affecting the healthy cells.

According to cancer statistics published by the American Cancer Society, there are estimated to be around 246,440 new cases of cancer affecting the respiratory system in the United States by the end of 2019, out of which, 228,150 cases are estimated to be lung and bronchus cancer. Moreover, around 142,670 deaths are estimated to occur from lung cancer in the same year. The large number of respiratory cancer cases among people of all ages is increasing the demand for precise and successful methods of radiotherapy such as the CyberKnife radiation therapy. The CyberKnife radiation therapy for lung cancer treatment market is anticipated to record a significantly high CAGR of over the forecast period, i.e., 2019-2027. The market is segmented by component, by end user and by region, out of which, the end user segment is further segmented into hospitals, radiation therapy centers and ambulatory surgical centers. On the basis of end user, the radiation therapy centers segment is anticipated to hold the largest share in the CyberKnife radiation therapy for lung cancer treatment market on account of increasing number of cancer patients preferring to visit specialized radiotherapy centers for better treatment sessions. 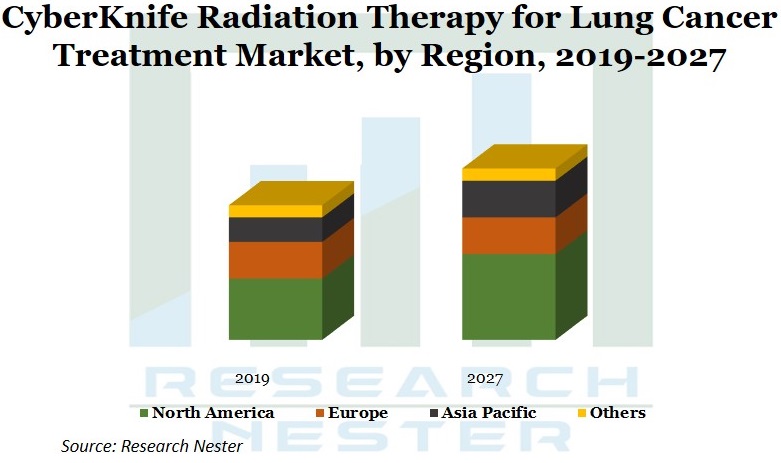 Rising Incidence of Cancer among People to Support the Market Growth

The increasing use of tobacco for smoking among people is a major risk factor which results in the occurrence of lung cancer. Another factor contributing towards the high incidence of this form of cancer is the increasing level of air pollution in various urban areas across the world. There were an estimated 15.5 million cancer survivors in the United States in 2016. This number is anticipated to increase to 20.3 million people by 2026, as reported by the National Cancer Institute. The growing incidence of cancer among people is thus estimated to increase the demand for effective radiotherapy procedures, such as those involving CyberKnife radiotherapy sessions.

CyberKnife radiotherapy system consists of a highly flexible arm that ensures targeted delivery of the radiotherapy to the cancerous cells and prevents any further multiplication of the cells. This is increasingly being preferred by patients and doctors as it minimizes the damage to normal and healthy cells, thereby providing a precise and accurate cancer treatment. This is anticipated to be a major growth stimulating factor for the market. Technological advancements in radiation therapy techniques is another factor estimated to propel the market growth in future.

Dearth of Skilled Radiotherapists to Inhibit the Market Growth

Operating highly advanced medical devices such as the CyberKnife radiotherapy system for the treatment of disorders requires highly skilled radiotherapists. The availability of such medical professionals is low, especially in low and middle income countries, and is thus anticipated to become a restraining factor for the market growth during the upcoming years.

The market in North America region is anticipated to hold the leading market share in CyberKnife radiation therapy for lung cancer treatment market which can be attributed to the rising incidence of lung cancer as well as the presence of highly advanced medical treatments in the region. Similarly, the market in Europe is estimated to hold a significant share in the market during the forecast period on account of increasing cases of cancer and growing demand for radiotherapy techniques. CyberKnife radiation therapy for lung cancer treatment market is anticipated to grow at the highest rate in the Asia-Pacific region as a result of high demand for CyberKnife system for radiotherapy, especially in countries such as India where healthcare infrastructure is developing at a fast pace.

The CyberKnife radiation therapy for lung cancer treatment market is further classified on the basis of region as follows: