Cryotherapy is used to treat various skin lesions and other disorders by employing extremely cold temperatures in order to provide relief to the patients by providing therapeutic effects or by destroying the diseased cells and tissues completely.  A cryotherapy unit is a medical device used during the cryotherapy treatment for locating as well as targeting the precise location of the area to be treated before beginning the therapy procedure.

The cryotherapy units market is anticipated to record a CAGR of around 10.1% over the forecast period, i.e., 2019-2027. The market is segmented by therapy, by area of application, by application and by region. Cryotherapy units market is further segmented on the basis of therapy into liquid nitrogen therapy, dry ice therapy and electric therapy, out of which, the liquid nitrogen therapy segment is anticipated to hold the largest share in the cryotherapy units market. Liquid nitrogen is the most effective substance for cryotherapy as it can be easily applied to the affected area and takes much less time to destroy benign skin lesions as compared to dry ice and electricity. It is the most widely used substance in cryotherapy and can be sprayed directly on the area to be treated. Further, it can be applied through a cotton swab or cryoprobes. Based on the applications segment, the market is segmented into oncology, dermatology, cardiology, pain management and others, out of which, the oncology segment is estimated to witness lucrative growth over the forecast period. This can be attributed to the growing developments in the field of oncology that increase the demand for newer and more efficient diagnostic and therapeutic methods. The growing use of cryotherapy for reducing muscular and body pain is anticipated to increase the growth of pain management segment. As per the Centers for Disease Control and Prevention, around 20.4% adults in the U.S. has chronic pain while 8% of adults suffered from high-impact chronic pain in 2016. The exceedingly low temperature improves the blood circulation in the body and provides relief to the inflammation and sore muscles. CLICK TO DOWNLOAD SAMPLE REPORT 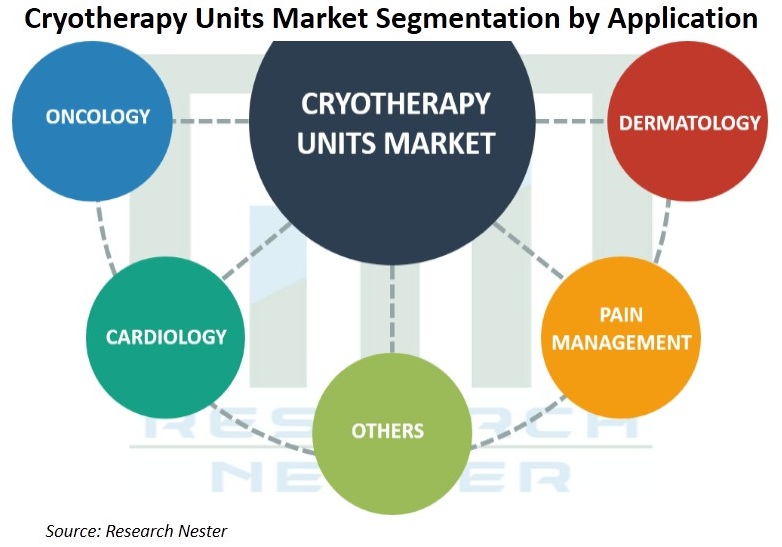 The demand for minimally invasive procedures is significantly increasing as it leads to a reduced scar formation, lesser pain and requires lesser time to heal as compared with traditional forms of open surgeries. Cryotherapy is a non-invasive which provides a localized and targeted approach for cancer treatment. This is estimated to propel the growth of cryotherapy units market in the upcoming years.

Application of Cryotherapy in Cancer Treatment to Drive the Market Growth

According to the World Health Organization, it was reported that in 2018, around 18.1 million new cases of cancer were detected and 9.6 million deaths due to cancer were estimated.

Advancements in cancer treatment procedures has introduced cryotherapy in place of or along with other treatment methods such as chemotherapy and traditional surgery. The high effectiveness of this therapy and the ease of operating the cryotherapy units and other devices further raise the demand for cryotherapy procedures. This is anticipated to result in an accelerated market growth.

Availability of Alternate Treatment Methods to Restrict the Market Growth

Cryotherapy is a relatively new technology and has gained attention mainly in the developed countries. A major part of the developing and under-developed countries has still not adopted this therapy as a treatment method as a result of availability of other cheaper and faster modes of treatment. This is estimated to become a major restraining factor for the market growth.

Our in-depth analysis of the cryotherapy units market includes the following segments:

By Area of Application

On the basis of regional analysis, the cryotherapy units market is segmented into five major regions including North America, Europe, Asia Pacific, Latin America and Middle East & Africa region. On account of the advanced healthcare facilities present in the region, cryotherapy units market in North America holds the largest share in the market and this trend is predicted to continue during the forecast period. The infrastructure is well set up in North America, mainly in the United States. This increases the scope of development of various medical devices and technologies in the region. However, the market in Asia Pacific is anticipated to witness the highest growth rate as a result of rising awareness among people about the cancer treatment methods available in the region. Moreover, the growing incidences of cancer is another major factor estimated to contribute towards the significant market growth. 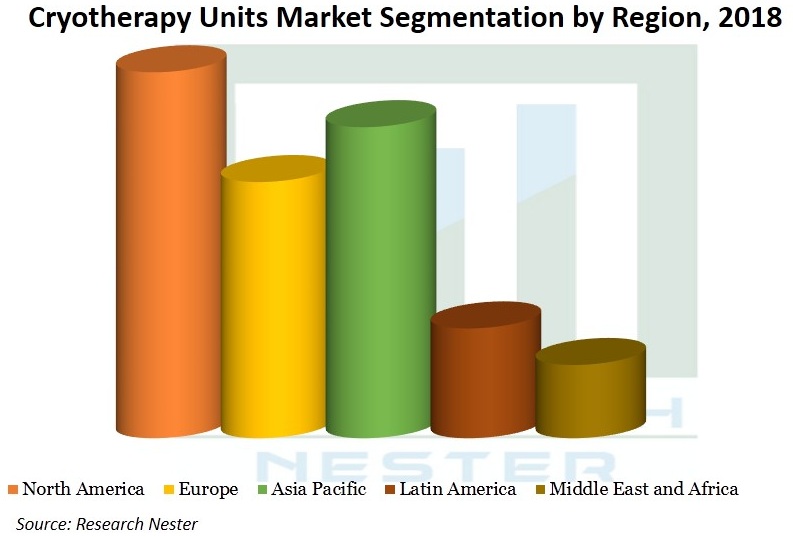 The cryotherapy units market is further classified on the basis of region as follows: