Coiled tubing is made up of electric welded tubular wire used at well intervention and drilling operations.  Filler metals are avoided at the time of manufacturing of coiled tubing wire. The key points which are to be considered for coiled tubing wire are (welding position, grade of wire, outer diameter of wire, total length, wall thickness, and identification number). Coiled tubing electric wire lines are used at the time of fishing job in exploratory, drilling or production phase to continue the well operations. It is rigid wire with maximum strength to lift heavy tools while digging out the materials from wells. Different grade of electric wires have varied tendency of bearing different temperature and pressure.

Coiled tubing are used at drilling derrick platforms to lift heavy and light weighted equipment’s to perform drilling operations.. Coiled tubing is formed in linear structure after re-spooling of coil reel to insert coiling wire into the well bore, opposite process is followed at the time of putting coil on reels. Trained engineers examine the well problems associated with tools and temperature on horizontal or deviated well formation and solve it on ground terminal.

The global coiled tubing market is expected to reach around USD 7 billion in 2027 from USD 3.7 billion in 2018 at a CAGR of 7.21% in the forecast period of 2018-2027. On the basis of regional platform, global Coiled Tubing Market is segmented into five major regions including North America, Europe, Asia Pacific, Latin America and Middle East & Africa region.

North America is expected to dominate the coiled tubing market owing to increasing number of drilling projects by key players, supporting government policies and growing need for well intervention across the region. 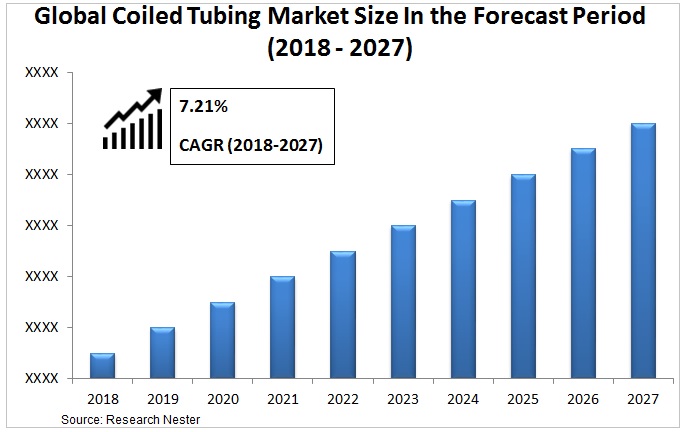 Global Coiled Tubing Market is further classified on the basis of region as follows: 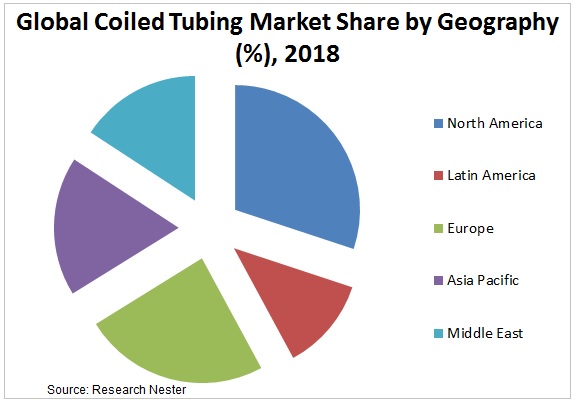 According to “Organizations of Petroleum Exporting Countries” current estimation for world’s proven oil reserves located in OPEC member countries is 81.89% in Middle East accounting for total amount of 65.36% of total OPEC reserves. By adopting best practices in the industry, realizing intensive explorations and enhanced recoveries OPEC member countries have made significant additions to their oil reserves in recent years. As a result, 1,214.21 billion barrels is OPEC's proven oil reserves currently, these all reasons are driving the growth of market.

Development of new wells in Canada

New survey by geological exploration association survey confirmation for developed wells demands for drilling and exploration operations and drives the growth of market.

Coal bed methane is new source of energy used in cooking utensils, increased in operation of drilling in CBM fields in countries such as China and India under Asia Pacific region is expected to drive the growth of market in future.

Innervation operation is necessary to avoid the well problems and enhance the productivity of oil and gas. Additionally, Middle East region with majority of drilled wells are on the stage of declining production rate that requires the well cleaning and drives the growth of market.

One of the challenging factor is declining fuel prices with unstable fluctuation due to clashes in OPEC for oil production, which hampers the growth of coiled tubing market in future.