Calcium ammonium nitrate has been used traditionally for the purpose of odor removal from wastewater during water treatment processes. CAN is also used in making of small scale explosives either by reprocessing the chemical or by simply grinding the compound and packing the material in a plastic box attached with a blasting cap. These wide range uses of calcium ammonium nitrate are expected to propel its market steadily during the forecast period. 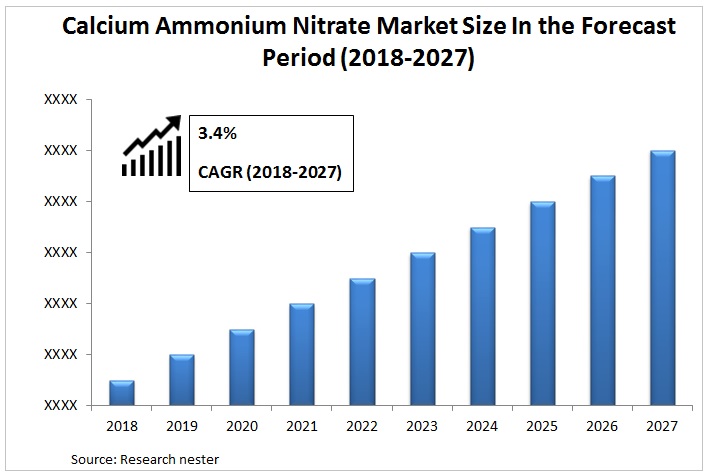 Global Calcium Ammonium Nitrate Market is further classified on the basis of region as follows:

The rising demand for Calcium Ammonium Nitrate and its by-products for various processes in pharmaceutical, agrochemical, explosive industries are expected to drive the market rapidly over the forecast period. The numerous uses of calcium ammonium nitrate in soil fertility enhancement and increasing production capacity by use of CAN in the form of fertilizer as well as the use of CAN as a low scale explosive in under-developed countries as Afghanistan, Pakistan and more, are anticipated to propel the calcium ammonium nitrate market over the forecast period. Rapid economic development with thriving agricultural sector is expected to boost the calcium ammonium nitrate market in the developing regions.

However, development of contact dermatitis among farmers using CAN fertilizers as well as growing demand for organic fertilizers on account of increasing environmental awareness is estimated to serve as the key restraints in the growth of the calcium ammonium nitrate market. Moreover, ban of CAN fertilizers due to illegal use of them as homemade explosives is anticipated to hinder the market growth further over the forecast period.