Breast biopsy devices are used for laboratory testing by removal of small portion of breast tissue. Breast biopsy procedures are used for the detection of cysts and to identify whether it is cancerous or not. Brest biopsy is used for detecting lump or thickening in breast, suspicious area in breast, unusual nipple or areolar changes and others. For the purpose of breast biopsy, components for instance, fine-needle aspiration biopsy, core needle biopsy, stereotactic biopsy and ultrasound-guided core needle biopsy are used. Fine-needle aspiration biopsy is the simplest type of breast biopsy that can be used to evaluate a lump that may be felt during a clinical breast exam. The tissues obtained through the biopsy procedure are sent to lab, where a pathologist analyzes blood and body tissue by examining the sample using a microscope and special procedures. Breast biopsy performed through surgical procedure is known as incisional biopsy. In incisional biopsy, a portion of the breast mass is removed in an operating room. On the back of rising consumer preference towards nominally invasive procedures, the breast biopsy devices market is anticipated to increase.

Breast biopsy device market is anticipated to record a CAGR of 5.5% over the forecast period. The Breast biopsy devices market is expected to value at USD 14.3 million at the end of the forecast period. Many multi-national companies are concentrating towards new product advances in breast biopsy devices. Moreover, rising cases of breast cancers reported by European Breast Cancer Coalition, International Association of Cancer Registries and others, is subsequently estimated to drive the breast biopsy market rapidly. On the basis of regional platform, global Breast Biopsy Device market is segmented into five major regions including North America, Europe, Asia Pacific, Latin America and Middle East & Africa region. 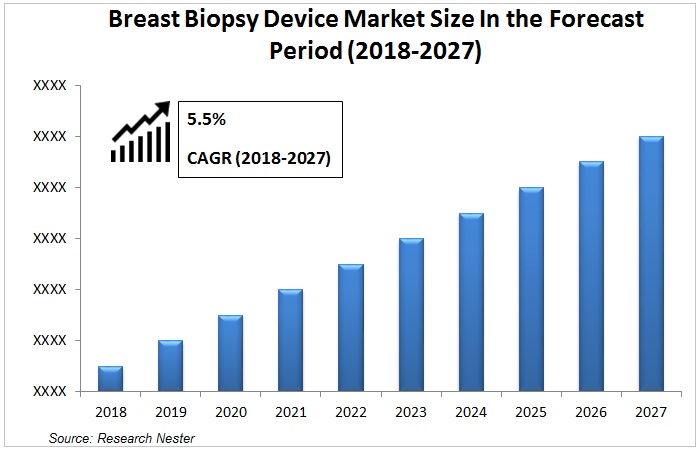 On the back of rising incidences of cancer in the global population, the breast biopsy device market is anticipated to increase over the forecast period. World Health Organization reports breast cancer as one of the leading causes of deaths in cancer patients. According to WHO statistics released on September 2018, 627 000 deaths were caused around the globe due to breast cancer. The cause behind breast cancer can be attributed to various factors such as, increasing alcohol consumption in women, rising female smocking population, with growing adoption of sedentary lifestyle and unhealthy eating among the women population across the globe.

Additionally, the number of incidences of cancer is anticipated to increase on the back of rise in mutational changes in the human body along with increasing exposure of skin to ultra-violet rays. These factors together are expected to propel the breast biopsy market significantly during the forecast period. Moreover, World Health Organization reports suggest that around one third of deaths from cancer are due to behavioral and dietary risks for instance, low fruit and vegetable intake, lack of physical activity and high body mass index. Growing female obese population are highly prone to breast cancer which is estimated to drive the breast biopsy market robustly during the forecast period across the globe.

However, lack of awareness in the female population regarding biopsy procedures and presence of sub-standard healthcare facilities results in 70% of cancer deaths approximately, in low- and middle-income countries, which is expected to hinder the steady growth of the breast biopsy devices market over the forecast period around the under-developed and some developing regions around the world.

Global Breast Biopsy Device Market is further classified on the basis of region as follows: