Blood glucose monitoring devices measure the glucose content in the blood but since glucose levels are dependent on plasma quantity in the blood, most of these devices perform a calculation and report the estimated plasma glucose levels of the patient. These devices play a key role in glucose management for patients suffering from diabetes mellitus or hypoglycemia and their usage in home care settings benefits patients by reducing the occurrence rate and severity of long-term complications from hyperglycemia by aiding in achieving closer-to-normal levels of glucose in the blood. These monitors usually employ the oxidation of glucose to gluconolactone catalyzed by glucose oxidase or glucose dehydrogenase (GDH). With new technological advancements and ongoing R&D activities, blood glucose monitoring has become comparatively cost efficient as well as minimally invasive and non-invasive.

Blood glucose monitoring device market is anticipated to record a CAGR of 10.2% over the forecast period i.e. 2019-2027. Many multi-national companies are concentrating towards new product advances in these devices. Currently, the market is observing vibrant growth owing to increasing demand for point of care testing furthering the requirement for glucose monitoring and diabetes control devices among the population worldwide.On the basis of regional platform, the global blood glucose monitoring device market is segmented into five major regions including North America, Europe, Asia Pacific, Latin America and Middle East & Africa region.

North America is panned to observe substantial growth in blood glucose monitoring device market on the back of increasing diabetic patient pool across the region due to growing working population along with adoption of sedentary lifestyle. North America is expected to be followed by Europe in terms of consumption because of growing requirement of these devices among geriatric population accompanied with reduced medical costs.

Asia Pacific is expected to positively impact the demand for these monitoring devices over the forecast period on account of rising disposable income, increasing awareness regarding disease management and growing healthcare infrastructures across countries such as, India, China and others that are promoting such devices across the region.

On account of increasing diabetic population as per the World Health Organization around the globe, the market is estimated to expand over the forecast period. The rising prevalence of diabetes is primarily attributed to worldwide increase in overweight population. The WHO states that the number of diabetics have nearly quadrupled since 1980 from 108 million to 422 million by the year 2014. Additionally, growing awareness among people regarding keeping diabetes under check in order to control blood sugar levels is estimated to boost market shares during the forecast period. Moreover, the rising incidences of children suffering from type I diabetes as reported by International Diabetes Federation which was more than 1,106,500 children in the year 2017 is estimated to increase, further impacting the blood glucose monitoring device market positively in upcoming years.

The global rise in geriatric population at a rapid rate is estimated to increase the incidence rate of diabetes on the back of reduced blood flow, neuropathy, substantial morbidity from macro- and micro-vascular complications and others. Health and Nutrition Survey, HANES III reported that approximately 20% of the population develops diabetes by the age of 75. This factor is estimated to display an increased use of scarce health care resources in the next several decades, propelling the blood glucose monitoring device market considerably over the forecast period.

Growing factors such as, lower testosterone levels in men and higher values in women, increasing dietary consumption of saturated fat and low in complex carbohydrates, adoption of inactive lifestyle and more is expected to increase risk factors for the development of diabetes in elderly persons more. Thus, these physical changes and lifestyle adoptions are estimated to increase the diabetes prevalence pushing the blood glucose monitoring device market during the forecast period.

However, associated restraining factors such as unfavorable reimbursement policies along with lack of awareness in the geriatric population across developing countries regarding these devices is expected to hinder the growth of market over the forecast period.

Global blood glucose monitoring device market is further classified on the basis of region as follows: 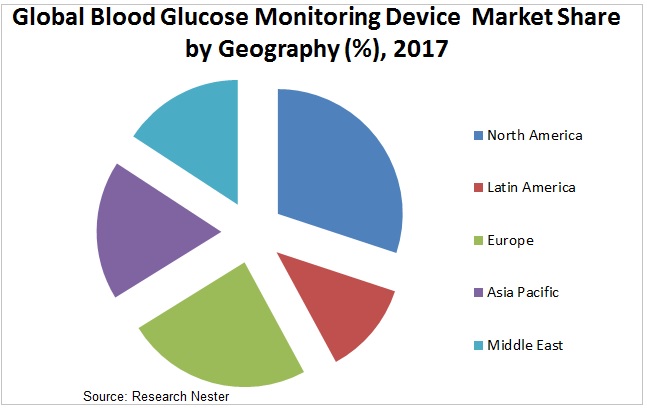