Increasing concerns pertaining to the use of fossil fuels which has not only affected the environment but also has led to various health problems, is driving the shift towards renewable sources of energy, such as biomethane. Biomethane, also known as renewable natural gas, is produced from biogas, which has a very high methane content of around 90% or more and less of CO2 and sulfur content. It is less corrosive, more valuable and more flexible than biogas. It is liquified to obtain liquified biomethane (LBM). Comparatively, LBM can be transported easily, and it can be allotted to either LNG or CNG vehicles and has a high fuel value which can be used to generate electricity and heat through combined heat and power plants. It generates similar ecological pollutants as natural gas fuel, such as carbon monoxide, nitrogen oxides, hydrogen sulfide, sulfur dioxide, and other pollutants. The major difference is that it is often considered as relatively or completely carbon neutral i.e. the net carbon emissions are zero which is achieved by balancing the carbon emissions with carbon removal from the environment. It is a source of low-carbon alternative fuel. The use of biomethane is a vital step for sustainable development in the upcoming years.

The market is observing a robust growth on account of increasing emissions of greenhouse gases, such as CO2 in the atmosphere. Additionally, high potential usage in automobile industries and using same infrastructural setup as natural gas which eliminates its high setup cost is expected to propel the growth of the market.

Moreover, eco-friendly properties of biomethane, makes it more suitable for its end-use applications as it does not lead to any kind of pollution. Furthermore, the use of waste material for its production aids in combating the problems, such as global warming and climate change which are estimated to drive the growth of the market.

The global biomethane market is anticipated to record a CAGR of 7.4% over the forecast period i.e. 2019-2027. The market is segmented by application into automotive and power generation, out of which, the automotive segment is anticipated to hold leading shares on account of reduction in emission of greenhouse gases, which ultimately reduces the ecological concerns, such as global warming and climate change. 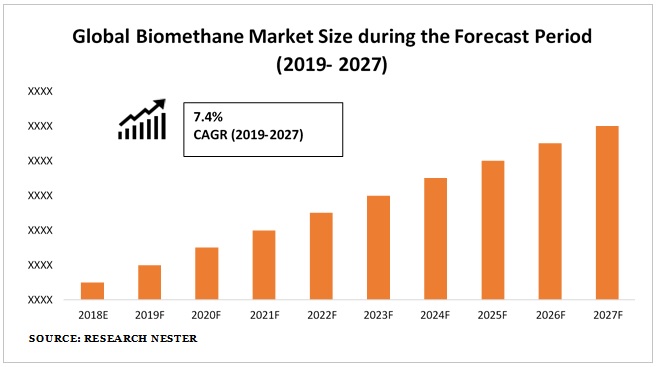 Ease in Availability of Raw Materials

Raw material required to produce biomethane is easily available. This can be attributed to the sufficient amount of organic matter present on the Earth, irrespective of the geographical location and environmental conditions. Additionally, its utilization in various sectors reduces dependency on fossil fuels, such as coal and petroleum along with reduced dependence on uranium for nuclear power plants. These factors are anticipated to support the growth of the market.

Production of biogas is a biochemical process that requires low investment. Since, biomethane is chemically identical to biogas, its production does not require any additional technology or infrastructure. This is estimated to positively impact the demand for biomethane over the forecast period.

Biomethane is primarily composed of methane, which is highly combustible. Therefore, the production and transportation of methane from biomethane plant requiring high level of precaution is projected to dampen the growth of the market.

Although, raw material required for biomethane production is abundant, it would not be adequate to meet the rising demand of power and energy needed in various sectors.  These factors are estimated to restrain the growth of the market in upcoming years.

The market in North America and Europe region is anticipated to hold leading share during the forecast period. This can be attributed to rising demand from the automotive sector along with favorable policies and financial assistance programs for the production of biomethane. Additionally, regulations regarding environmental pollution due the emission of harmful gases are among major reasons for its adoption and production in these regions. The market in Latin America and Asia Pacific region is estimated to grow significantly during the forecast period.

The global biomethane market is further classified on the basis of region as follows: