Benzotrifluoride (BTF) is a fluorohydrocarbon and a member of (trifluoromethyl) benzenes with molecular formula C7H5F3 and a molecular weight of around 146.11 g/mol. The IUPAC name for Benzotrifluoride is trifluoromethylbenzene. It is derived from fluoroform. It is a colorless clear liquid with an aromatic odor. It is insoluble in water and slightly denser than water.  It is used as solvents for traditional organic synthesis and for fluorous synthesis. It is environment friendly and relatively inert and is suitable for use as a solvent for a wide range of chemistry including ionic, transition-metal catalysis and thermal reactions. 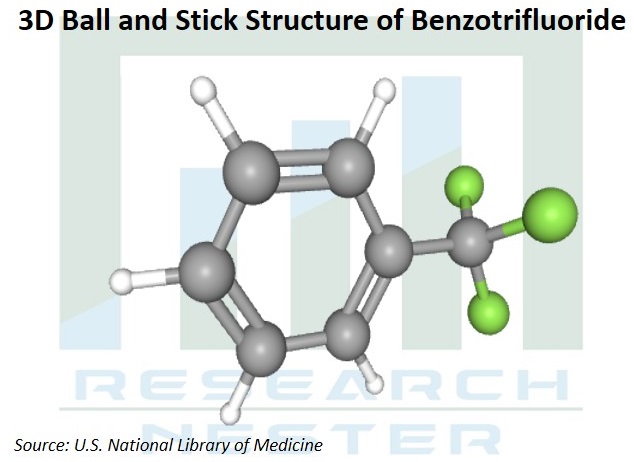 The growth of the global BTF market is thriving on the back of rapid industrialization across the globe, rising demand for increasing crop yield in developing regions and increasing pharmaceutical applications of BTF. Further, increasing discoveries of new applications of BTF and its derivatives in expanding end-user industries is majorly driving the BTF market. 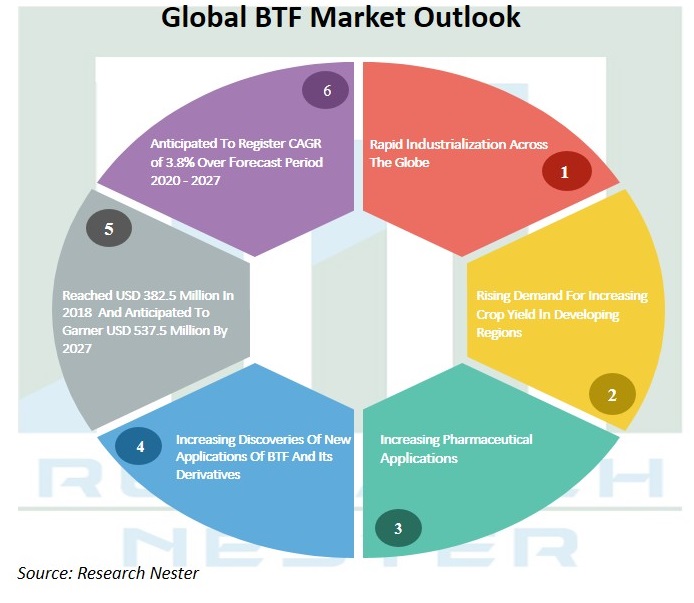 The global benzotrifluoride market is segmented by regions into North America, Latin America, Europe, Asia – Pacific and Middle East and Africa. Among these regions, the market of Asia – Pacific held the top rank in the global BTF market during 2018 with a market share of 41% in the year 2018 and is anticipated to hold its dominance by expanding at a CAGR of 4.2% over the forecast period. Owing to factors, such as, increasing consumption of fertilizers and pesticides in agriculture in under-developed and developing nations, for instance, China and India, coupled with the rising healthcare spending in the Asian countries, which is also accumulating to greater medicine consumption, and greater application of BTF in the manufacturing of dyes, as well as in ionic, transition-metal catalyzed and thermal reactions, all of these factors are anticipated to contribute significantly towards the growth of the global BTF market in the region. 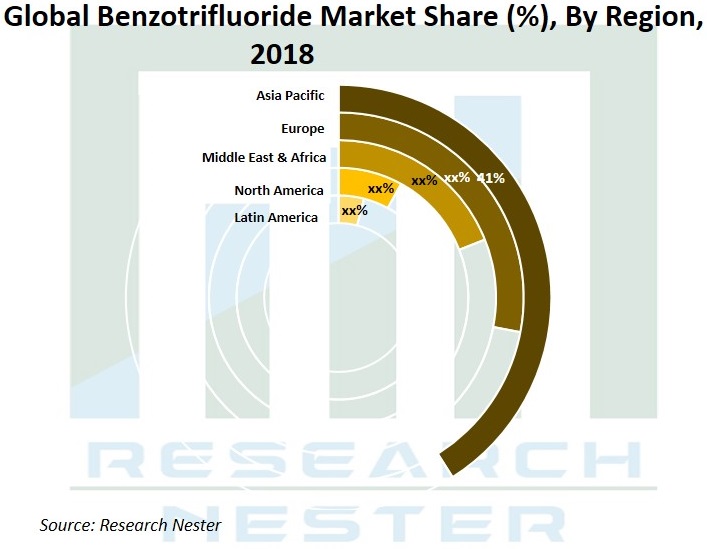 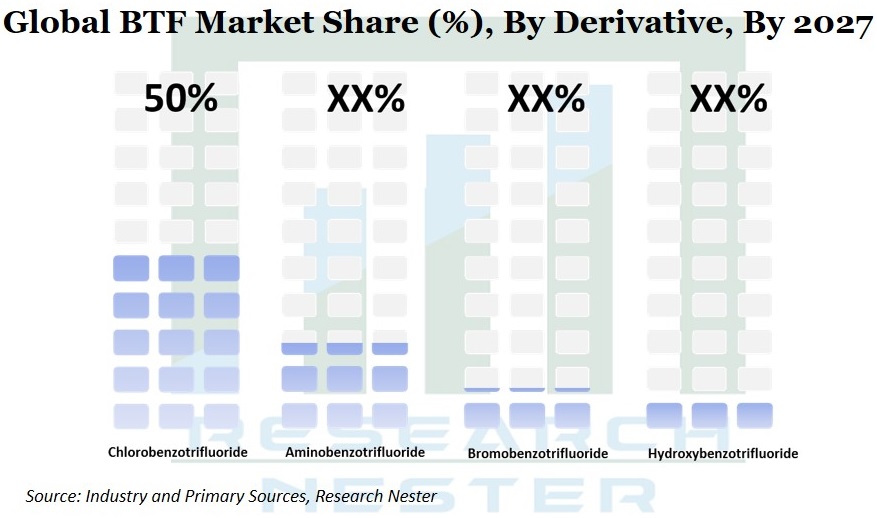 The global BTF market has been segmented by end user into chemical, pharmaceutical, agricultural, coating and others. Among these segments, chemical industry segment is anticipated to hold largest market share of around 44% owing to wide application of BTFs as an intermediate to obtain a number of compounds, such as dyes, chemicals, and cleansers. It is also widely used as solvents for organic compounds and fluorous synthesis. In addition, its major application is in paints as moisture cure and alkyd resins. It is also used in the production of epoxy, polyester, acrylic, silicone, ethyl silicate, phenolic varnish, vinyl butyral, melamine/urea formaldehyde, and nitrocellulose resins. The chemical industry segment was estimated with a market value of USD 157.8 Million in the year 2018 and is further forecasted to reach USD 236.4 Million by the end of 2027 with a growth rate of 1.50x.

Benzotrifluoride is a hazardous substance on account of its flammability and can be easily ignited by heat, sparks or flames. The chemical is also known to cause many health hazards, for instance, irritation in the lungs, added with bronchitis with the development of cough, phlegm and shortness of breath on repeated exposure. It is also banned in many nations around the globe owing to high toxicity, which might also affect the aquatic life. Another greater challenge observed with BTF is that it is not susceptible to direct photolysis, which restricts its utilization in the various chemical reactions within the agriculture and pharmaceutical industries. All of these factors are expected to act as a barrier to the growth of the global BTF market during the forecast period.