Drones are unmanned aerial vehicles that are operated either through a remote control by a human operator or through computers autonomously. Drones are being increasingly used across various applications, be it commercial or agriculture or any other service. Autonomous diving drones, being intelligent enough to apply their minds, can be controlled by the use of a laptop, computer or even a smartphone.

Drones are in a way helpful for monitoring crowds, overseeing environment and sometimes act as a rescue device in the case of emergency. They are generally tethered and in some cases untethered, and are also portable and lighter in weight.

Autonomous diving drones, being fitted with an advanced AI system, are being deployed for various applications such as for exploring under the sea, mapping and also for inspection of ships. Considering their numerous benefits involved, the autonomous diving drones market is estimated to record a rapid CAGR over the forecast period, i.e. 2019-2020, owing to its features that offer several advantages, such as improved quality of data, accurate navigation requirements and many more.

The market is segmented by application into search & rescue, ship detection, scientific exploration, 3D mapping, amusement and surveying landscape, out of which, amusement segment is anticipated to occupy largest market share on the back of emergence of interests amongst people for the need of mental refreshments, outdoor fun activities and entertainment. DOWNLOAD SAMPLE REPORT HERE 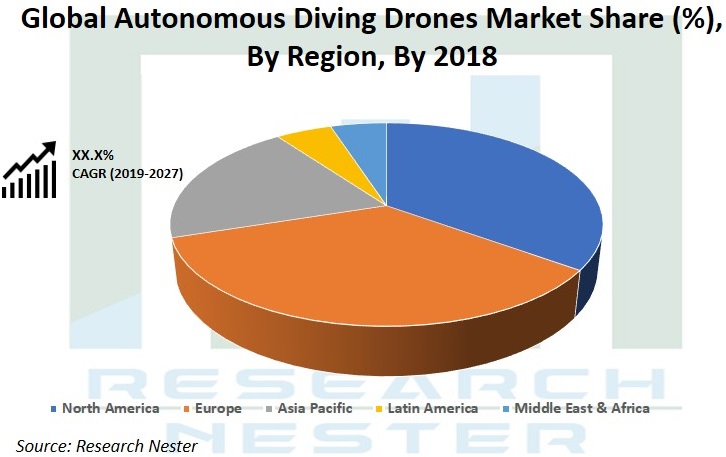 Autonomous diving drones finds increasing application in the oil and gas industry for the inspection of offshore rigs and underwater pipelines in order to avert any disaster. Considering the various levels of risks and costs involved, inspection must be undertaken by the pipeline & process services provider without delaying the process for another time period, as this could help prevent any leakages or identify any structural problems that need to be redressed.

Autonomous diving drones are light-weighed and possess their own source of energy while not depending on external source for power, which helps in lowering operational costs, for no employment of individual is required to operate the system.

As autonomous diving drones work without the assistance of an operator, there is a considerable improvement in data quality, owing to the increase in data to signal ratio that helps in ensuring accuracy of the data survey taken for such purpose.

Roll Out Of 5G Services

The launch of 5G cellular networks has already shown an indication of a possible use of drones, as base stations, that can be operated for collection of data at millimeter wave frequencies. Technological advances in the IT & Telecom industry have made possibilities of real-time data transfer, high speed analytical processes, ultra high definition video transfer, and others, thereby making it easier for autonomous diving drones to emit data using these technologies to its server.

Interests for Marine Research Amongst Ecologists

Ecologists around the globe are on a continuous search for new species or have interests to study and observe particular genus or a family. It becomes quite difficult to understand the scenario of deep underwater creatures, owing to lowering oxygen levels, which doesn’t allows diving of such depths. With the help of these autonomous diving drones, researchers can predefine their target goals and accomplish their mission of study.

With the advent of new forms of amusements such as scuba diving, snorkeling and others, there is growing demand amongst global travelers for seeking adventurous ways to make their travel pleasant and memorable, which is generating the demand for diving drones. Autonomous diving drones in a way can follow these travelers amidst their ongoing activities, and provide them with loads of video and picture memories.

On the basis of regional analysis, the autonomous diving drones market is segmented into five major regions including North America, Europe, Asia Pacific, Latin America and Middle East & Africa region. The markets in North American and European regions are predicted to occupy the largest market share, owing to the presence of large number of market players and consistent advancements in technology brought in by these market players in the regions.

The global autonomous diving drones market is further classified on the basis of region as follows:

Apart from that, a few more companies such as Sofar, FathomONE, Robosea and others are offering non-autonomous diving drones which are almost similarly featured and are operated with the help of a tethered cable.

Furthermore, numerous DIY communities and research groups from several regions around the globe are focusing on expansion in product mix and product line of diving drones and are fulfilling the demand for the purpose of research or entertainment in their domestic market.