Alunite or Alum Stone is accessible in abundance in rock-forming sulfate mineral that take up spaces or layers in volcanic rocks such as rhyolites, trachytes, and andesites, where it is composed gradually through a chemical reaction with escaping sulfurous vapor from molten lava. It is found in varying colors including yellow, red, reddish brown and others. It was used as a source of potash (during World War I) and as a source of alumina (during World War II) for various applications. It is used extensively to make potash alum, which is used for treatment of water, aftershave treatment and has little known kitchen use.

Alum has several household and industrial applications too, in day-to-day purposes such as purification of drinking water has been possible with the use of potassium alum. In many places, potassium alum is preferred to treat water instead of water purifiers and filters.

In pharmaceuticals, alunite derivatives have a significant role in developing a chemical named flocculation, which is used in the manufacturing of styptic pencil. This pencil is applied on minor cuts and injuries to stop bleeding; alunite is additionally used in manufacturing adjuvant for the vaccine (a chemical that enhances the immune response).

In cosmetic business, alunite has found its involvement as an ingredient in production of depilatory waxes, skin bleaching agent and as an ingredient in some brands of dentifrice. Owing to its versatile usage and no breakthrough in inventing which may replace alunite, the demand of alunite is anticipated to grow from various industries.

The market is observing significant growth on account of its varied usage across industries. Further, increasing industrialization in the field of chemicals, pharmaceuticals and others is set to drive the demand for alunite. For instance, as stated by United Nations Industrial Development Organization, in 2017, Japan captured the majority shares in Competitive Industrial Performance (CPI) index followed by Germany and U.S., which reflects the productive capacity, intensity of industrialization and others. This indicates the increase in demand for alunites in various end use industry.

The global alunite market is anticipated to record a CAGR of around 4.15% over the forecast period i.e. 2019-2027. The market is segmented by end user industry into pharmaceuticals, FMCG, cosmetics and personal care and others, out of which, the cosmetics and personal care segment is expected to have the highest market share over the forecast period. 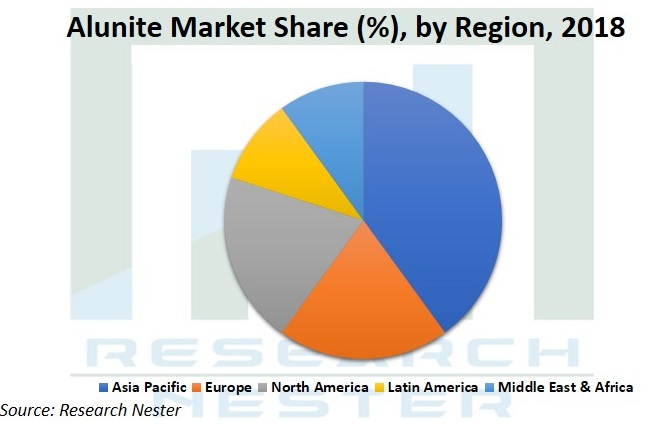 Increased usage in personal care and cosmetic industry is a major factor to boost the demand for alunite on the back of its abilities as a deodorant. Alunite is widely used in personal care products such as antiperspirant. It does not cause allergy, skin irritation, appearance of stains on clothes as it does not contain oil and coloring components. For instance, according to Indian Brand Equity Foundation (IBEF), the annual growth of the Indian deodorant market is 18% and was valued at USD 382.2 million in 2014.

The recent prohibition pertaining to mining due to its undesirable impact in the environment and well as certain protection issues for miner’s are projected to hamper the growth of alunite market.