On October 12, 2019, Concert Pharmaceuticals, Inc. presented positive results from its Phase 2 trial of the investigational medicine CTP-543 which was recently completed. The trial was for patients with moderate to severe alopecia areata. The company plans to bring forward the trial into Phase 3 evaluation next year in order to develop a new treatment for patients with this disorder.

Alopecia is a condition that refers to excessive and sudden hair loss, mainly in circular patches. Alopecia areata is a common autoimmune disorder which causes bald spots resulting in complete or partial hair loss. Various drugs and hair transplant therapies can be used for the treatment of this condition. The major factor triggering hair loss is the changing lifestyles among people including consumption of tobacco and alcohol, smoking and unhealthy dietary habits. Further, genetic factors might likewise contribute towards the growing incidences of alopecia among both men and women.

The alopecia treatment market is anticipated to record a CAGR of around 5.5% over the forecast period, i.e., 2019-2027. The market is segmented by disease, by drug, by gender, by route of administration, by distribution channel and by region. On the basis of disease, the market is segmented into androgenic alopecia, alopecia areata, alopecia totalis, alopecia universalis and others, out of which, the androgenic alopecia segment is anticipated to hold the largest share in the alopecia treatment market and grow at the highest rate during the forecast period. Androgenic alopecia is the most common form of alopecia which occurs among both men and women. According to the American Hair Loss Association, more than 95% of hair loss cases among men can be credited to androgenic alopecia. Moreover, approximately 85% of men are estimated to develop significant thinning of hair by the age of fifty. On the other hand, the alopecia areata segment is estimated to hold a significant share in the market as well, owing to its high prevalence. Alopecia areata is an autoimmune disorder that occurs when the immune system of the body begins to attack the hair follicles which gives rise to hair fall. 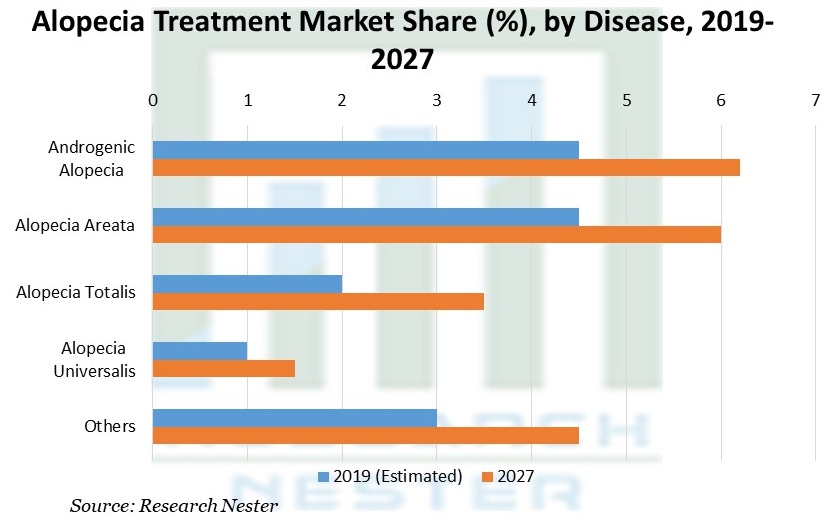 As per the 2017 practice census results by the International Society of Hair Restoration Surgery, more than 50% of men and women treated surgically by the member physicians were between the ages 30 and 49. It can be deduced from this fact that the prevalence of alopecia is almost equal in both the genders. CLICK TO DOWNLOAD SAMPLE REPORT 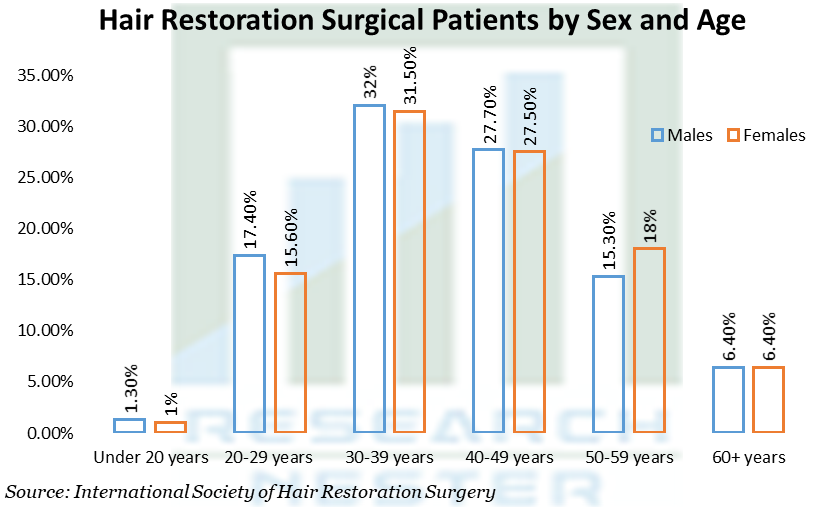 Chronic disorders such as cancer, rheumatoid arthritis, hypertension and others are anticipated to give rise to conditions such as excessive hair loss. Among women, the increasing prevalence of polycystic ovary syndrome (PCOS) is another prominent factor adding towards the market growth. The hormonal imbalance produced as a result of this disorder affects the hair follicles, which is therefore anticipated to result in alopecia and raise the demand for this market.

Demand for Alopecia Treatment Market to Rise with Ageing Population

The growing age results in an increased loss of hair, especially among men, which is the leading cause of this disease. The requirement for hair loss treatment products by the geriatric population is thus increasing at a significant rate. This is another factor anticipated to result in the growth of the market during the forecast period.

High Cost of Medication to Limit the Market Growth

Highly expensive medicines combined with various possible side-effects of those medications is anticipated to restrict the growth of the market during the forecast period.

Our in-depth analysis of the alopecia treatment market includes the following segments:

The growing technological advancements in the medical sector as well as rising research and development activities in the healthcare industry are estimated to boost the market in the North America region, thereby accounting for its highest share in the market. The increasing approval of drugs by the US Food and Drug Administration (FDA) is another factor anticipated to support the market growth in region. The market in Asia Pacific region is anticipated to observe significantly high growth rate during the forecast period. This can be attributed to the rising geriatric population and unhealthy lifestyle changes among the population in this region. Increasing cases of male and female pattern baldness in the region, mainly in countries such as China and India, are additional factors estimated to contribute towards the market growth.

The alopecia treatment market is further classified on the basis of region as follows: