The global airport scanner machines market is projected to grow at a significant CAGR during the forecast period, i.e., 2021-2029 owing to the increasing public security concerns and for the increasing need to combat terror attacks, such as, plane hijacking and bomb blast, across the globe. Globally, more than 35 acts of unlawful interference at airports were recorded in 2018, including seizure of aircrafts and attack on aviation facilities. 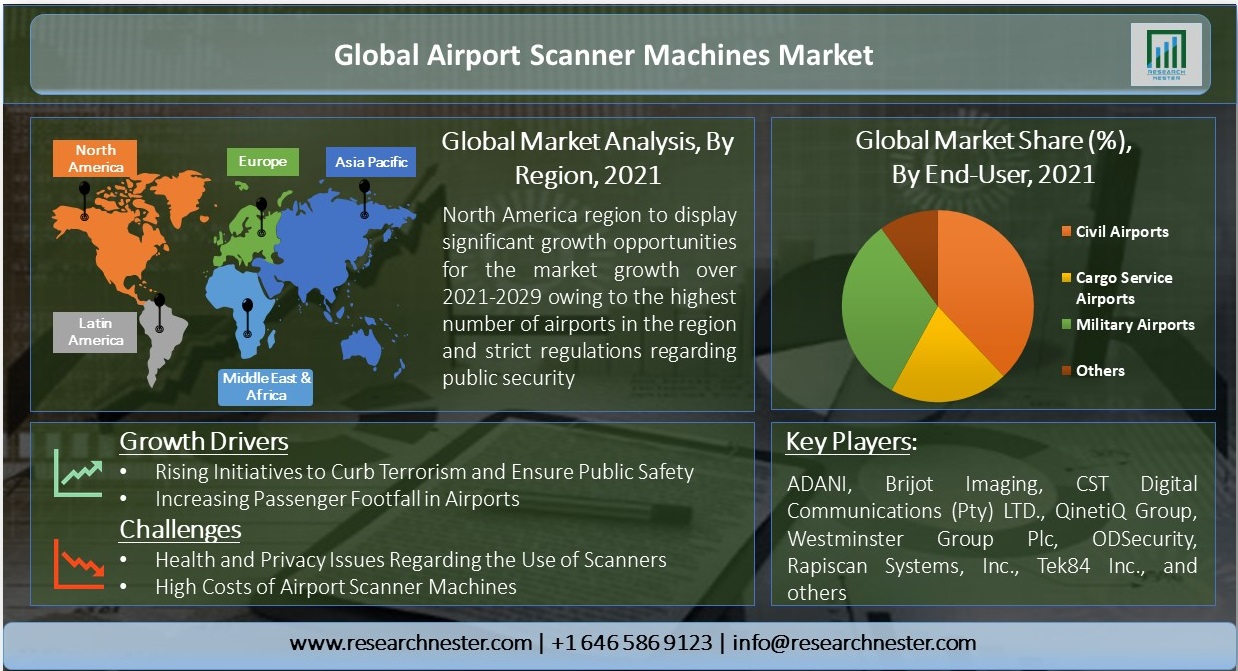 The market is segmented by type into millimeter wave scanner and backscatter X-ray scanner. Out of the two, the millimeter wave scanner segment is estimated to generate the highest revenue in the market during the forecast period owing to its high speed, accuracy, higher sensitivity, and 3D high-resolution proficiency. On the other hand, the end-user segment is divided into cargo service, civil, military airport, and others, out of which the civil airport segment is estimated to garner a substantial share during the forecast period owing to the large number of people travelling through airways. The increasing passenger traffic on airports is estimated to raise the need for strict security check, which, in turn, is estimated to encourage the market growth. In the year 2018, more than 4 billion passengers travelled by air transport, both domestic and internationally. Moreover, the passenger footfall increased by over 3 % in the year 2019.

However, the reluctance among people to get scanned on the back of privacy issues is a challenge to the market growth. Many countries give right to the citizen to refuse scanning and opt for a pat down check instead. CLICK TO DOWNLOAD SAMPLE REPORT

The market in the North America is anticipated to hold the largest share during the forecast period on the back of presence of a large number of airports in the region. The U.S. has over 19,000 public and private airports, thereby making it a major consumer of airport scanner machines. Frequent incidences of terrorist attacks and increasing cases of smuggling in the U.S. is another factor anticipated to boost the market growth in the region. For instance, following the 9/11 attack in 2001, airport scanners were made mandatory for all international and domestic airports in the U.S.

The market in the Asia Pacific is projected to attain a significant CAGR during the forecast period. On account of the increasing globalization in the region, numerous airports are built in nations such as India, China, and Japan. Moreover, with numerous multinational conglomerates setting up their business hubs in the region, there is a surge in need for business travel among the business enthusiasts. This has resulted in an increase in passenger footfall in airports, which is raising the need for deploying security systems, such as airport scanner machines. Such a factor is also anticipated to drive the growth of the market in the region.

Latin America market is estimated to witness modest growth by the end of 2029, on the back of rising concerns of international smuggling of contrabands, such as, drugs and illegal wildlife products. 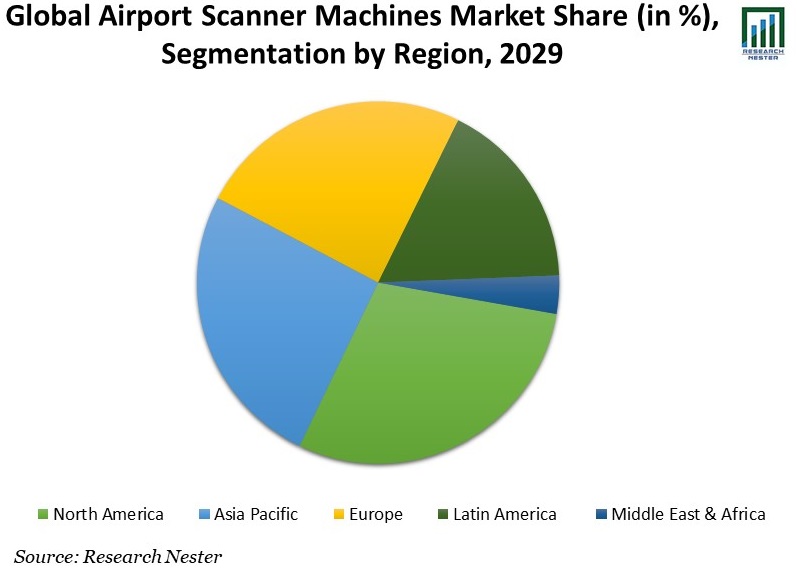 The global airport scanner machines market is further classified on the basis of region as follows:

1) What are the major factors driving the growth of the airport scanner machines market?

Ans: Concerns for airport security, backed by the rising incidences of terrorism and smuggling activities are the major factors driving the market growth.

2) What would be the CAGR of airport scanner machines market over the forecast period?

Ans: The market is anticipated to attain a significant CAGR over the forecast period, i.e., 2021-2029.

3) What are the challenges affecting the airport scanner machines market growth?

Ans: Health and privacy issues and high production costs of airport scanner machines are some of the major factors estimated to hamper the market growth.

4) Which region will provide more business opportunities for growth of airport scanner machines market in future?

Ans: The market in the Asia Pacific will provide the highest growth opportunities for the market during the forecast period on account of increasing construction of airports backed by the constant economic development in the region.

5) Who are the major players dominating the airport scanner machines market?

7) What are the segments in the global airport scanner machines market?

Ans: The market is segmented by type, application, end-user, and by region.

8) Which segment captures the largest market size in the type segment in the airport scanner machines market?

Ans: The millimeter wave scanner segment is anticipated to hold the largest market size on the back of its high efficiency and accuracy, and is estimated grow at a significant CAGR over the forecast period.