Aircraft leasing is the practice of procurement of aircraft on lease from other airlines or leasing companies to operate aircraft without the financial burden of buying them, and to provide temporary increase in capacity. They can also be considered as a form of contract whereby the lessor provides minimum operating services such as aircraft, crew, maintenance and insurance (ACMI). Also, the lessee provides the balance of services along with the flight numbers. In all other forms of charter, the lessor provides the flight numbers. The procurer usually includes financial shareholders and reputed corporates. Procurement can also be done directly from the original equipment manufacturer (OEM) or it can be done from the companies who are in the business of leasing aircrafts. Various safety and legal agencies will make sure that they maintain the planes well and they lease aircraft for long time.

Aircraft leases are controlled by the Federal Aviation Administration (FAA) as per the Federal Aviation Regulations (FARs). The FAA categorizes aircraft leases as either dry leases or wet leases. Inside a dry lease, the aircraft owner provides only the aircraft and no crew member is included. If at least one crew member is provided in the lease arrangement, it becomes a wet lease as defined in the FARs. A wet lease is an exception to the simple definition of a lease because it does not involve transferring ownership of the aircraft. The lessor maintains operational control of the aircraft under a wet lease.

The global aircraft leasing market is estimated to grow at a CAGR of around 5% over the forecast period i.e. 2019-2027. The aircraft leasing market is expected to maintain a steady growth rate during the forecast period attributed to the rise in low cost aircraft carriers. Another factor known to have strengthened the market demand includes set up of supportive commercial aviation rules, increase in the number of air passengers in tandem with the volume of freight transported. On the basis of leasing type, aircraft leasing market is segmented into dry and wet leasing. Out of which, dry segment is expected to witness major market share as dry leasing leads to the reduction in expenditure for training personnel and aircraft maintenance, it is contributing majorly to market growth.

The Government awarded more than 300 routes to airlines and helicopter operators under RCS-2 in January, 2018. Whilst being largely regional in focus greater connectivity will also feed additional passengers to the larger aviation centres creating a need for larger aircraft types. With the increase in the number of these new routes also expected to grow aircraft leasing market.

Lease rates for an aircraft depends upon its age, lease terms, and creditworthiness of an airline, besides the demand. Globally passenger demand continues to be on rise and lessors have not encountered difficulty in placing the used NG aircraft with carriers. According to the International Air Transport Association (IATA), the air travel industry has a long-term annual growth rate of 5.5%. Boeing, the plane manufacturer, expects air traffic growth of more than 4.5% per year over the forecast period. It also predicts that the global fleet size will double. Rising incomes and a growing middle class in emerging markets will likely continue to be the biggest drivers of growth. 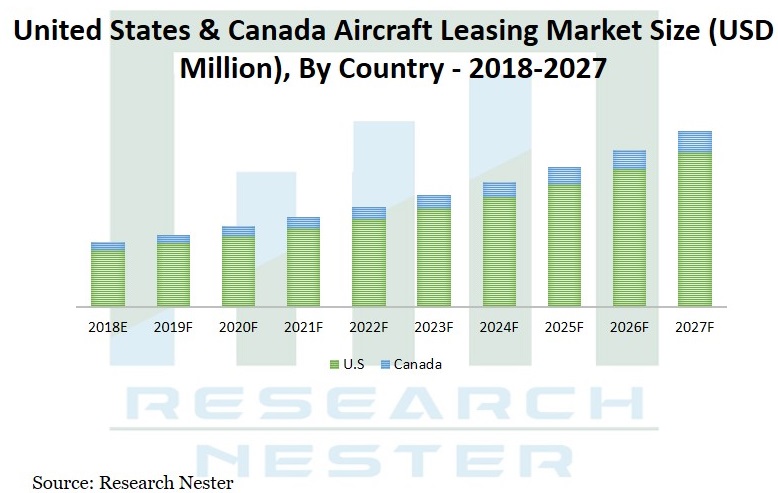 Developments concerning aircraft leasing industry include improvements in airport infrastructure in the developing economies, globalization and increased trade of industrial commodities. Moreover, low interest and lease rates along with the rising demand of low-cost carriers, falling crude oil prices, and ease of travel are some factors that drives the growth of aircraft leasing market.

Global aircraft leasing market is further classified on the basis of region as follows: