Airbag is the gas inflated device which is used to protect the passengers from injuries during accidents with a release velocity of up to 320 km per hour while taking only 15-25 milliseconds to open. With the help of airbag sensor technology a person can survive the crashes. Firstly, the signal of airbag sensor has to go through ADC (Analog to Digital Converter) and then it touches the AC voltage source and the high pass filler. To bloat the airbag, the vehicles are fitted with the sensors which make an alert sound to inform the rider about the safety system enablement. Airbag sensors are organized by the central unit known as Airbag Control Unit. This ACU consist of various types of sensors depending on the various aspects of the accidents such as speed, brakes, and others. Airbag Sensors are generally fitted to the front of the vehicle due to the maximum number of collisions taking place on the front end. The airbag sensors are accompanied with safety sensors on which the intensity of the collision is measured. If the intensity surpasses the specific threshold results in triggering the airbag sensor that releases the airbags accordingly.

Airbag sensor is a high security and safety product in the automotive industry and on account of growing automotive advancements in the region, North America is panned to observe substantial market growth of airbag sensors. North America is estimated to be followed by Asia Pacific in terms of consumption due to expanding airbag sensors requirements increasingly produced vehicles across the region. On the back of multiplying used of airbag sensors in growing aerospace industry for higher employee as well as passenger safety measures, Asia Pacific is budding as a regional Airbag Sensors and its derivatives consumption market. 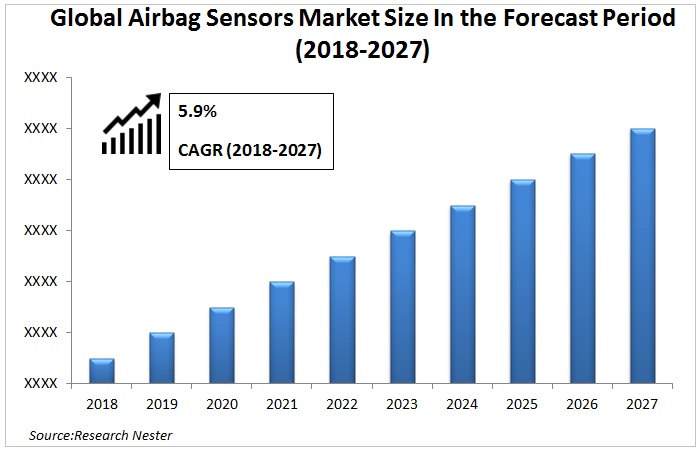 By Mode of Sensors

Global Airbag Sensors Market is further classified on the basis of region as follows:

The rising demand for airbag sensors on account of growing disposable income of the present population is surging the demand for customization in automobile industry. Rapid economic development with thriving automotive manufacturing sector is expected to boost the automotive airbag sensor market in the developing regions. Moreover, increasing on road automobile numbers is expected to increase aftermarket sales along with the rising trend of motorization among the current population is driving the airbag sensors market significantly at present and is expected to impact the market strongly during the forecast period. Moreover, latest technological advancements and enhancements in airbags for various safety measures in passenger duty on road vehicles as well as passenger aircrafts is estimated to propel the airbag sensors market sturdily. Furthermore, rapid urbanization along with positive GDP figures of developed and developing nations such as U.S., China and others and favorable government initiatives regarding individual safety are projected to flourish the growth of airbag sensor market in automotive industries.

However, concerns such as carelessness on the part of consumer along with cost constraints associated with airbag sensors is predicted to attribute as a key restraining factor in the growth of airbag sensors market.