Glucose syrup is a sweetening agent majorly used by people all over the world. Glucose Syrup is processed from starch originating foods such as maize, potato, wheat and many more. The process to produce glucose syrup has multiple processes, acid conversion is one of them. The traditional glucose syrups were manufactured by acid hydrolysis of corn starch at high temperature and pressure which has major applications in confectionary food items. It involves mixing of small amount of acid with the starch slurry and allowing the starch to break down in an easier and cheaper way but it is more difficult to control. The sugar syrups are manufactured in a wide range of applications, enabling them to be used in many different foods. The acid converted syrups produced include a high-sugar fermentable syrup that is also used in alcohol production, brewing, vinegar manufacture and yeast manufacture. Moreover more viscous syrups are unlikely to crystallize, so, they are used in ice cream and fruit canning purposes. Furthermore the availability of lower converted glucose syrup has low sweetness and is of value as nutritional source in soups and beverages.

Acid converted syrup finds its application in the pharmaceutical and confectionery industries for sweetening and medications. This type of product is now manufactured extensively using a continuous process. These wide spread application and cost effective factors are anticipated to impel the growth of acid converted glucose syrup market during the forecast period.

The enlarged market of acid converted glucose syrup is driven by the glucose consumption all around the globe. The United States has been recorded to consume around 19.5 teaspoons or 82 grams (g) of sugar per day which is over double the amount recommended by the American Heart Association (AHA). As per our preliminary study, the global acid converted glucose market is likely to attain a CAGR of around 3% between 2019 and 2027.

Asia-Pacific holds a major chunk in the revenue of global acid converted glucose syrups due to higher consumption rate in China and India. North America is expected to generate substantial revenue in the next few years due to rising consumption of baked foods. CLICK TO DOWNLOAD SAMPLE REPORT 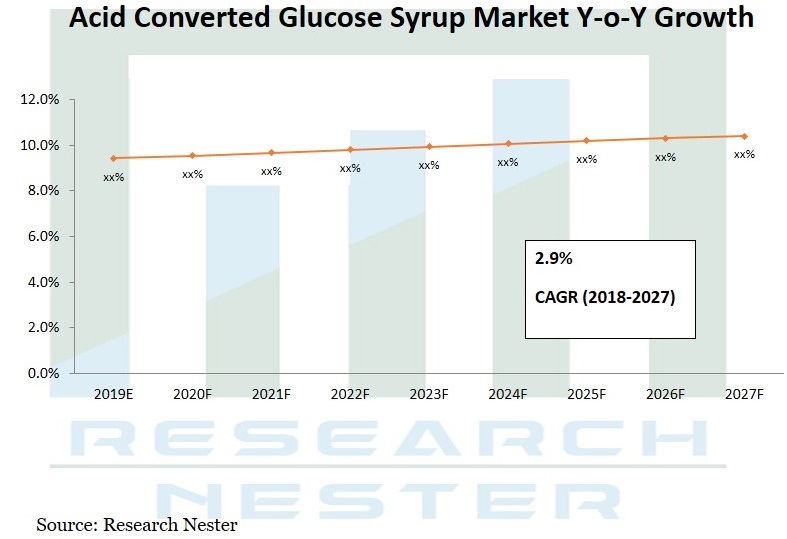 However, reviews regarding increasing health concerns of consumers related to consumption of unhealthy syrups has influenced the global glucose consumption to deteriorate by 2% in 2018. It is free of fat but adds to calories. Foods which contains glucose syrup make people feel hungry every time even when full appetite, hence people tends to gain weight in a shorter span of time. The body secrete out insulin and this increased rate of secretion leads to many diseases such as diabetes. These health concerns are anticipated to hinder the market growth further over the forecast period.