The technological revolution of 3D printing has changed the face of the medicine by contributing in numerous applications in the form of 3D printed drugs. The 3D Printed Drugs market is anticipated to witness lucrative growth in the near future. The ease of ingestion of the drugs for the patients suffering from several diseases causing seizures such as epilepsy and medicinal intake by old age and infants among others are the various factors that are believed to affect the growth of the 3D Printed Drugs market in upcoming years. Further, various flavors can be induced in the medicine negating the sour taste. Their applications in customized medicinal therapy are widening its area to various diseases such as cancer and others that could not be done before. The research treatments such as the 3D printing customization in shape of medicine utilizes in various forms of medical implant to hone the patient value and overall healthcare systems across the globe. These factors are anticipated to bolster the 3D printed drugs market with significant market size of USD 1,559.8 Million by the end of 2024 from USD 489.9 Million in 2017. Furthermore, the global 3D printed drugs market is predicted to witness robust growth by expanding at a CAGR of 18.2% over the period 2018-2024.

Growth Highlights based upon Regional Platform during 2017-2024

The global 3D printed drugs market is segmented by regions into North America, Latin America, Europe, Asia-Pacific and Middle East and Africa. Among these regions, the Asia-Pacific 3D printed drugs market accounted for the dominating market size of USD 166.3 Million in 2017 and is believed to grow with this positive growth over the forecast period, which can be attributed to the robust expansion of the pharmaceutical industries in this region. Further, rising adoption of advanced healthcare technologies by consumers on the back of swelled disposable income is expected to positively drive the growth of the market in this region.

With U.S. as the prominent region, the North America 3D printed drugs market is believed to hold the second largest market share in 2024 owing to the presence of well-established healthcare industry along with the expanded funding from the government organizations in the region. In addition to that, U.S. 3D printed drugs market is expected to achieve Y-o-Y growth rate of 20.4% in 2024 as compared to previous year. 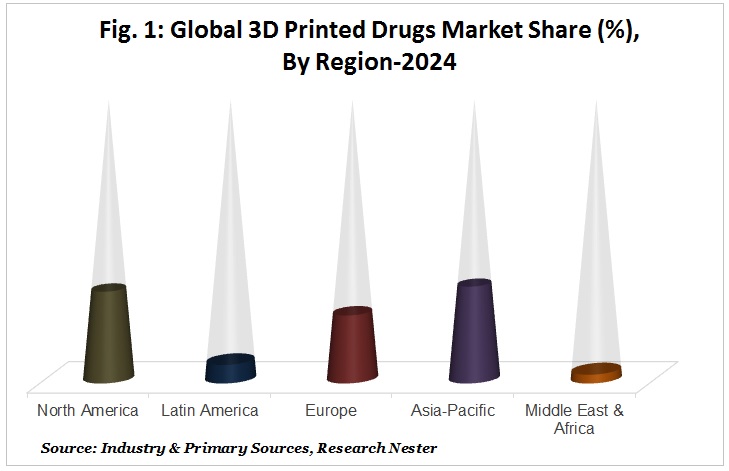 The global 3D printed drugs market has been segmented by application into orthopedic, neurology, hearing & audibility aid, medical implants, dental and others. Among these segments, the neurology segment accounted for the dominating market share of more than 35% in the overall market of 3D printed drugs around the globe. More than 600 diseases related to brain disorders exists which are directly or indirectly related to the malfunctioning of the nervous system. Various applications in medical science in relation to 3D printed drugs could significantly affect the current medication system to bring positive results. Driven by these factors, the neurology segment is believed to dominate the 3D printed drugs market and is anticipated to achieve absolute $ opportunity of USD 437.9 Million between 2018 and 2024. The second largest segment in the 3D printed drugs market is orthopedic segment which held 23.0% of the total market share in 2016 and is predicted to observe significant growth rate over the period 2018-2024. Further, the hearing and audibility aid segment is estimated to expand with highest CAGR during the forecast year. 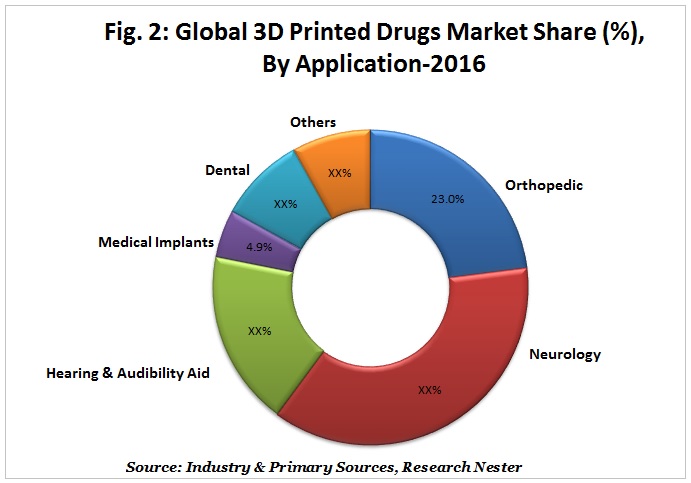 The global 3D printed drugs market is thriving on the back of high-drug loading capacity such as high production rates and increasing R&D activities among major market players and other small companies that are additionally driving the growth of the market. The increased spending on research and development activities is anticipated to increase the 3D printed drugs market share rapidly in the future. Further, the size, dose, appearance and rate of the delivery of a drug can be designed to suit an individual which will make it easier for the patients to take these medicines. In addition to that, the chewable formulations similar to gummies with a diverse range of shapes, sizes, colors, textures and flavors to make them more attractive to various patient groups, particularly the young or the elderly, facilitating compliance of the treatment is anticipated to propel the 3D printed drugs market in upcoming years.

Additionally, the increasing advancements in 3D printing technology to increase the product varieties as well as the personalization abilities is also believed to aid the 3D printed drugs market to grow in the near future.

Some of the affluent industry leaders in the global 3D printed drugs market are Aprecia Pharmaceuticals LLC., FabRx Ltd. and GlaxoSmithKline (GSK).

GlaxoSmithKline (GSK), a British pharmaceutical company headquartered in Brentford, London, is the only well-established pharmaceutical firm to demonstrate an interest in exploring 3D printing technologies for its supply chain. The company’s fundamental strategy is based upon business collaborations that help it to work with partners to deliver new and innovative medicines, vaccines and consumer healthcare products.

Moreover, other key and niche players are working towards the expansion of product portfolio along with investing in high quality R&D to develop healthcare products in order to gain competitive edge in the global 3D printed drugs market.