According to a report by the International Energy Agency (IEA), released in March 2020, biogas resources can fulfill 20% of global gas demand, if used to its full potential, while also reducing greenhouse gas emissions globally. The technological advancements and awareness pertaining to biogas and its effectiveness in removing the greenhouse gases from the atmosphere, further resulting in dropping carbon footprint is boosting the growth of the biogas industry. Moreover, approximately 12 million people were employed in the renewable energy sector in 2019, wherein bioenergy was the second leading employer with an estimated 4 million people.

Energy is the backbone of life, and is required in various different forms to sustain growth and development. Energy, in the form of electricity, cooking fuel, and vehicular fuel, among others, is essential for any and every kind of economic and social development across the globe. Moreover, the ongoing development activities have resulted in an upsurge in the demand for energy globally. According to the IEA, the global energy demand is estimated to increase by 4.6% in 2021, which will be 0.5% above the 2019 levels.  This demand is, however, the highest in emerging markets and developing economies, where it is set to rise by 3.4% above 2019 levels.

The rise in energy demand is directly proportional to the emissions of CO2 and other harmful greenhouse gases in the environment. Burning of fossil fuels, such as coal and petroleum releases carbon dioxide, carbon monoxide, methane, and other pollutants, causing a massive rise in the global temperature and pollution level. As per the same report by IEA, demand for coal is estimated to increase by 60% in 2021, pushing 1,500 Mt rise in emissions. Greenhouse gases absorb much of the heat which is stored in the atmosphere, resulting in melting of snowcaps, climatic changes, and other adverse effects on the environment. This further breaks down the protective ozone layer, making a hole in it.

Along with this, another hostile outcome of the rising energy demand is the exhaustion of fossil fuels. Coal, natural gas, and crude oil are limited, and hence, perishable. The over-exploitation of these resources for economic development over the decades is another major factor behind the adoption of renewable or green energy across the globe.

Renewable energy is a sustainable form of energy. Solar, hydro, onshore and offshore wind, wave and tidal, geothermal, biomass, and ocean thermal energy are some of the renewable sources of energy. However, biomass is one of the most under-utilized sources of renewable energy, which has immense untapped potential.

Biomass is the organic waste which has the potential to produce electricity or heat, such as wood, agriculture and kitchen waste, waste from forests, human and animal waste, and others. Actually, organic waste releases methane during its decomposition. If not trapped, this methane can degrade the environment, which makes generation of biogas even more essential. With the rise in population and industrial development, the amount of organic waste produced annually is also rising. Efficient channelization of biogas can not only provide an alternative renewable fuel, but also significantly reduce the production of greenhouse gases. According to the data by the IEA, the total global production of biogas and biomethane was around 35 million tons of oil equivalent (Mtoe) in 2018, whereas, the total generation potential of biogas is over 570 Mtoe. 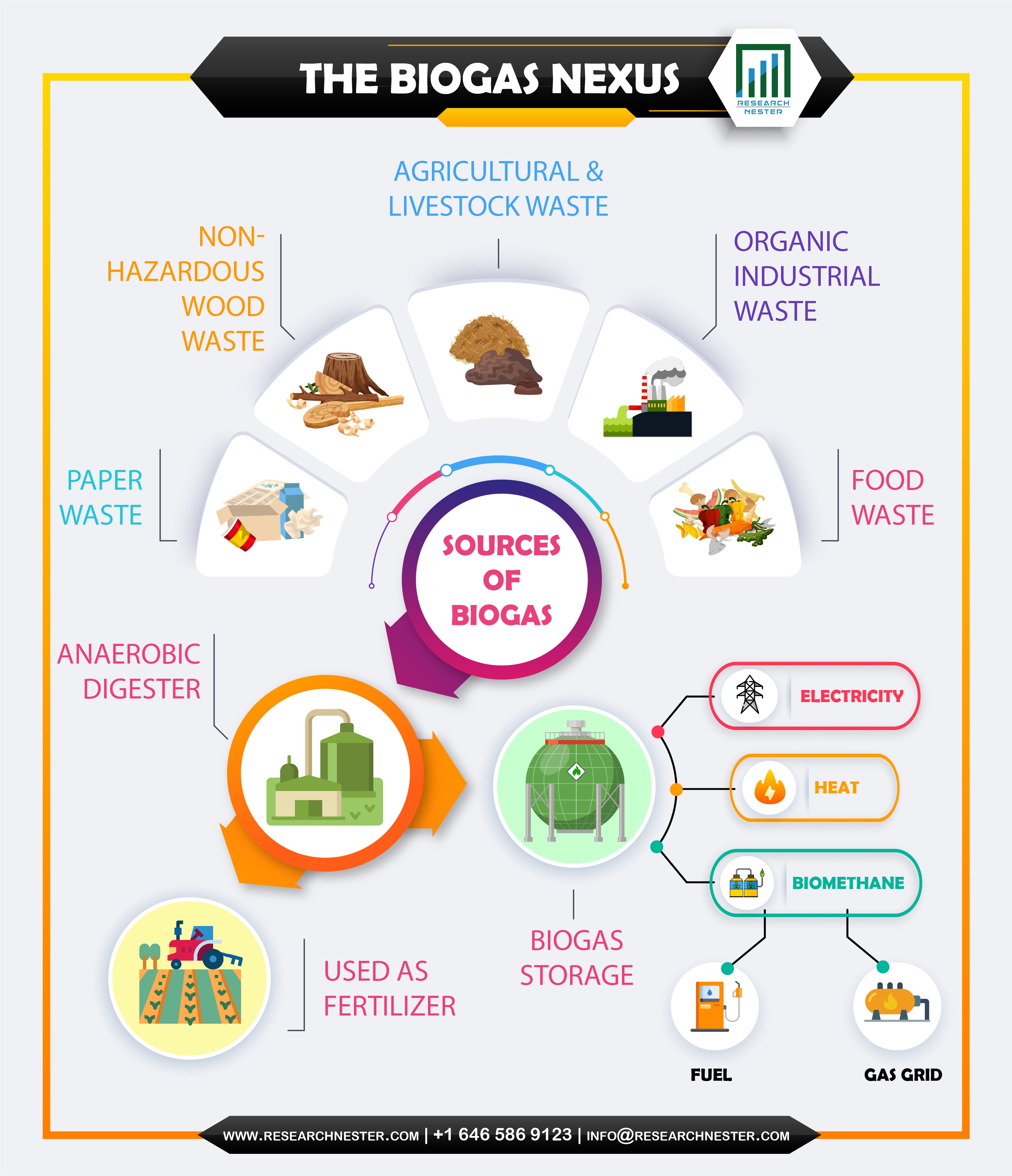 In IEA’s report, ‘Outlook for biogas and biomethane: Prospects for organic growth’, the complete biogas consumption was 35Mtoe in 2018, where more than 60% of the production volume is from Europe and North America. With over 20,000 biogas plants, Europe is currently leading the biogas production globally, wherein, Germany has major share of these plants. Moreover, as per WBA, in the overall power generation in 2019, renewables accounted for 20.5% in Africa, 32.5% in Americas, 22.3% in Asia, 28.7% in Oceania, 33.7% in Europe, and 37.8% in EU-28.

Developing nations, such as China, India, and Japan, are estimated to provide growth opportunities for the biomass market, backed by growing demand for electricity in emerging economies. According to a report by the World Biogas Association in 2019, among the ~ 50 million micro-scale digesters operating globally, 42 million were in China, whereas, another 4.9 million were operating in India. Moreover, in the rest of Asia, South America, and Africa, there is installation of around 700,000 biogas plants.

On the other hand, Japan’s Strategic Energy Plan is estimated to attain carbon neutrality by 2050 along with aiming to reduce GHF emissions by 2030. Moreover, the country’s ‘The Sixth Strategic Energy Plan’ is estimated to notably increase power generation from renewable energy in FY2030, making it the main power source. It’s expected to be 36%-38% of the overall power generation, up from 22%-24% as per the 5th plan.

Opportunities and Limitations with Biogas

The increasing demand for clean and renewable sources of energy is expected to boost the demand for biomass in upcoming years. Biomass is a cheaper alternative to most traditional sources of energy, and is easily available worldwide. In fact, the initial cost of installation of biogas plant is significantly low, in comparison to other energy plants, such as thermal, wind, or hydro power plants. Furthermore, generation of biogas also reduces organic waste, while promoting reuse and recycling of wastes. Strategically planned waste minimization and green procurement programs are further bound to aid the market growth over the years.

However, low awareness in underdeveloped countries is estimated to act as a barrier to the market growth. Moreover, requirement of large land area, along with prevalent misconception related to biogas, such as its production being dirty or complex, or that it doesn’t play a significant role in combatting climate change, are expected to challenge the market growth.

January, 2018: Hitachi Zosen Inova (HZI), and BESIX Group decided to collaborate to build the world’s largest energy-from-waste (EfW) plant in the Emirate of Dubai. This facility is set to treat 5,000 tons of non-recyclable municipal solid waste per day.

August, 2018: The International Biomass Torrefaction Council (IBTC) and TAPPI’s International Bioenergy and Bioproducts Conference (IBBC) announced a new partnership to help promote awareness of torrefied biomass, and how it can be used in a variety of sustainable capacities.

September, 2021: Siemens Energy was chosen to provide power equipment by Hitachi Zosen Inova for the Dubai Waste Management Center energy-from-waste (EfW) plant, in the UAE, which is anticipated to be completed by 2024. Once operational, it will be the largest EfW plant in the Middle East region.

November, 2021: European Waste Management Sector released a study revealing that municipal recycling target of 65% and landfill cap of 10% has the potential of reducing ~150 million tonnes CO2 emissions in EU and UK, as compared to 2018 levels.

C&G Ltd., Amec Foster Wheeler, The AES Corporation, Suez Environment S.A., Waste Management Inc., Keppel Seghers, Babcock & Wilcox Co., Covanta Energy Corporation, Hitachi Zosen Inova AG, and ADI Systems Inc. are some of the major companies involved in generation of energy from waste. Moreover, companies such as Veolia Environment, and Energiedienst AG, are highly investing in research & development activities in the energy and power sector, in order to develop and sell innovative products. Further, market players such as ABI Energy Consultancy Services, provide focused consultation for renewable energy resources. In addition to this, the biomass market is estimated to cross USD 85 Billion in terms of revenue by the end of 2030, and various major companies are anticipated to join the market in the upcoming years.

Research Nester is a global market research company that provides research analysis for more than 14 different sectors. At Research Nester, we provide a detailed research report as per the requirements of the client, and ensure the formation of a proper strategy for the business growth. Our research analysts deliver a detailed overview of the renewable energy market and other related markets, which is tailored to help the clients to obtain a clear picture of the market. The research reports at Research Nester also cover major critical points, such as how to stay ahead of your contenders, best time to release a new product to yield maximum benefits, and the market growth during a certain time period, among others. Additionally, our intense knowledge of the market can efficaciously answer doubts to satisfy the customer needs, when and how to invest in a specific sector, and the CAGR of the market in the upcoming years. This can provide an upper-hand to anyone interested in expanding their business portfolio, entering a new market, or investing in a business in the industry.