In the recent years, agricultural production has been developed under a scenario of opening of the Mexican economy to international competition, privatization, and deregulation, which have been the most significant elements of the macro-economic policy. Some of these elements, include adherence to the Free Trade Agreement with the United States and Canada in 1994, which have strongly influenced the evolution of the agricultural sector in Mexico. Mexico is among the world’s leading agri-food producers. Mexico continues to be the fifth largest corn producer in the world. According to the statistics by the United States Department of Agriculture (USDA), consumption of corn in Mexico has increased from42,300 metric tons in 2017-18 to 44,700 metric tons in 2019-20, whereas export of corn has increased from 958 metric tons in 2017-18 to 1000 metric tons in 2019-20. 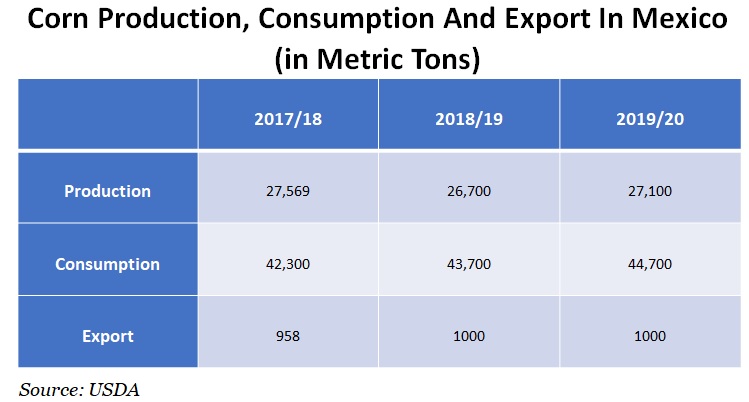 Though corn production is spread throughout the entire country, and in a wide range of climatically diverse conditions, it is primarily supplied by eight states: Sinaloa, Jalisco, Mexico, Michoacán, Chihuahua, Chiapas, Veracruz, and Tamaulipas. The increasing focus of the government for the growing agriculture produce which is opening up opportunities for several by-products requiring dry milling machines, are therefore anticipated to promote towards the growth of the Mexico dry milling market in the coming years.

The Mexico dry milling market registered a value of USD 1735.22 million in the year 2019 and is expected to garner a CAGR of 5.15% during the forecast period, i.e. 2020-2028. Additionally, the dry milling market in Mexico is also anticipated to gain an incremental $ opportunity of USD 89.43 million in the year 2020 as compared to the previous year. Moreover, the market is also expected to grow by 1.5x and gain an absolute $ opportunity of USD 902.9 million during the forecast period. CLICK TO DOWNLOAD SAMPLE REPORT

The Mexico dry milling market has been segmented on the basis of end product into ethanol, distiller’s dried grains and solubles, fine grits, course grits, flours and others. The flours segment registered the largest market share of 36.28% along with a value of USD 629.56 million in the year 2019. On the other hand, the segment is also anticipated to grow by a CAGR of 5.19% during the forecast period. The flours segment is also expected to gain an incremental $ opportunity of USD 32.71 million in the year 2020 as compared to the previous year and further attain an absolute $ opportunity of USD 330.83 million by growing at 1.5x during the forecast period. 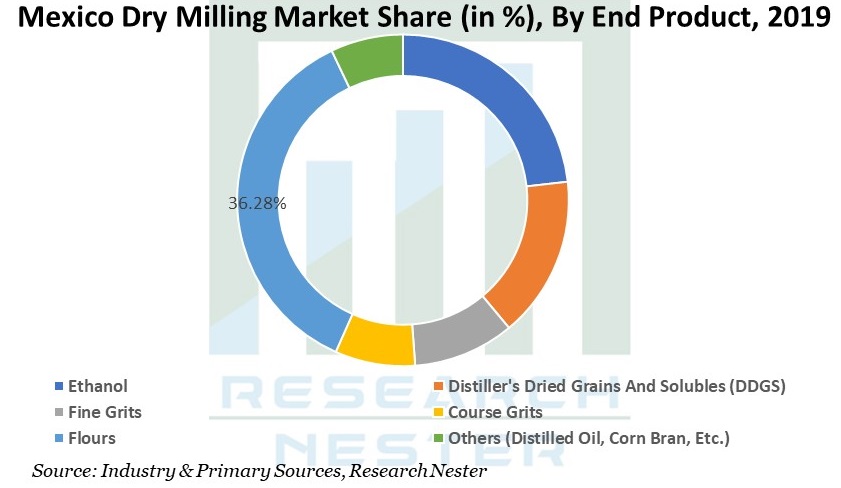 According to the statistics by the Foreign Agricultural Service (FAS) of Mexico, total corn consumption for the year 2020 was registered at 44.7 million metric tons, which was an increase of 2.3% compared to the previous year.

Corn is traditionally a staple food source in many parts of the world. Currently, its range of applications has also extended to feed and biofuel owing to the several beneficial properties associated with corn. Moreover, approximately 20% of the annual corn harvest is currently used by industrial corn processors to produce a variety of products such as sweeteners, starches, oils, ethanol, and animal feeds. In Mexico, corn continues to be the preferred feed grain, given the low international prices and nutritional characteristics. The increasing demand for food and feed products in Mexico, backed by the increasing utilization of corn to produce such by-products, are raising the need for the greater deployment of dry milling machines, which in turn is anticipated to drive the growth of the Mexico dry milling market over the forecast period.

The extensive agricultural support by the Government of Mexico is one of the major reasons anticipated to drive the growth of the Mexico dry milling market. The extensive support program in Mexico is managed by the Mexican Secretariat of Agriculture, Livestock, Rural Development, Fishery, and Food (Secretaría de Agricultura, Ganadería, Desarrollo Rural, Pesca y Alimentación [SAGARPA]). Moreover, the local government of Mexico is also increasing agricultural investments to encourage and boost this sector. Subsequently, increasing food security concerns in the country have led the government to take initiatives to encourage the agriculture sector, which in turn is fuelling the demand for dry milling machines.

Corn grain quality is determined by growing conditions, drying operations, and harvest practices. To produce high-quality grain, hybrid selection and timely harvest of corn are some of the most important factors. The high maintenance costs to retain corn quality during the harvesting and dry milling processes is therefore the major concern that is anticipated to hamper the growth of the Mexico dry milling market.

What are the major factors driving the growth of the Mexico dry milling market?

Increasing demand for food and feed products is one of the major factors that is driving the growth of the market.

What would be the CAGR of Mexico dry milling market over the forecast period?

Who are the major players dominating the Mexico dry milling market?

What are the major segments in the Mexico dry milling market?

The market is majorly segmented by end product, source, application and end user.

What can be the significant growth opportunity for the end product segment in the Mexico dry milling market?

The flours segment, which is a sub-segment of the end product segment, held the largest market share of 36.28% in the year 2019 and is anticipated to display significant growth opportunity.

High maintenance cost of dry milling machines is one of the major factors anticipated to act as a barrier towards the growth of the Mexico dry milling market.